Allow me to play the devil’s advocate here and ask: what is a computer?

Apple would like you to think that the iPad is more than capable to replace your current portable (Windows) computer. Initially, people laughed at the “what is a computer” ad campaign when Apple was pushing its 9.7-inch iPad Pros back in early 2016, but 5 years and quite a few leaps and bounds in iPad hardware and software, who’s laughing now?

The iPad has cemented itself as the undisputed tablet king to the point that no big tech YouTuber really even covers the most premium Android tablets. Apple had plans for this and has always been finding new ways to push the limits of the iPad to make it more and more viable to become a true laptop replacement. Arguably, the biggest milestones in reaching that goal were the introduction of iPadOS and the official trackpad support in that same version of iPadOS.

With the added trackpad/mouse support to the OS, Apple introduced its own hardware for users to take advantage of this new feature by releasing the Magic Keyboard for the 2020 iPad Pro lineup. There is just no way around it––it is a truly amazing piece of hardware. 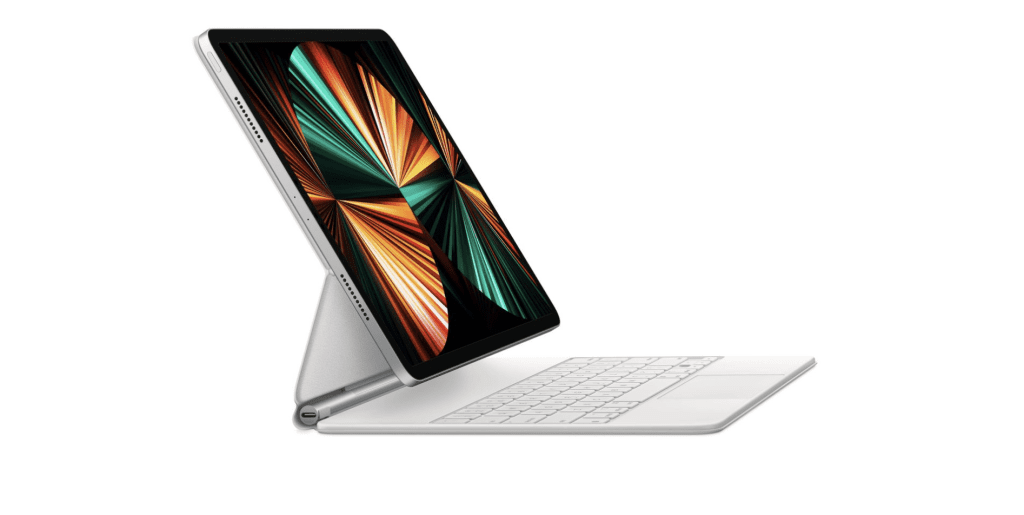 The other thing that there’s no way around is that it is incredibly expensive! For its asking price of AED 1,199.00–1,399.00, you can get a brand-new iPad, which deters many people from buying the Magic Keyboard. The only other first-party option you have is Apple’s Smart Keyboard for iPad. However, at a steep price of AED 729.00–799.00 and with no trackpad, the Smart Keyboard has become a really tough sell over the years.

This is where Logitech’s alternatives come in, offering much of the same feature sets (and sometimes more) for a lot less money. Logitech also remains the only company that takes advantage of the Smart Connector pins on most modern iPads through their close partnership with Apple. 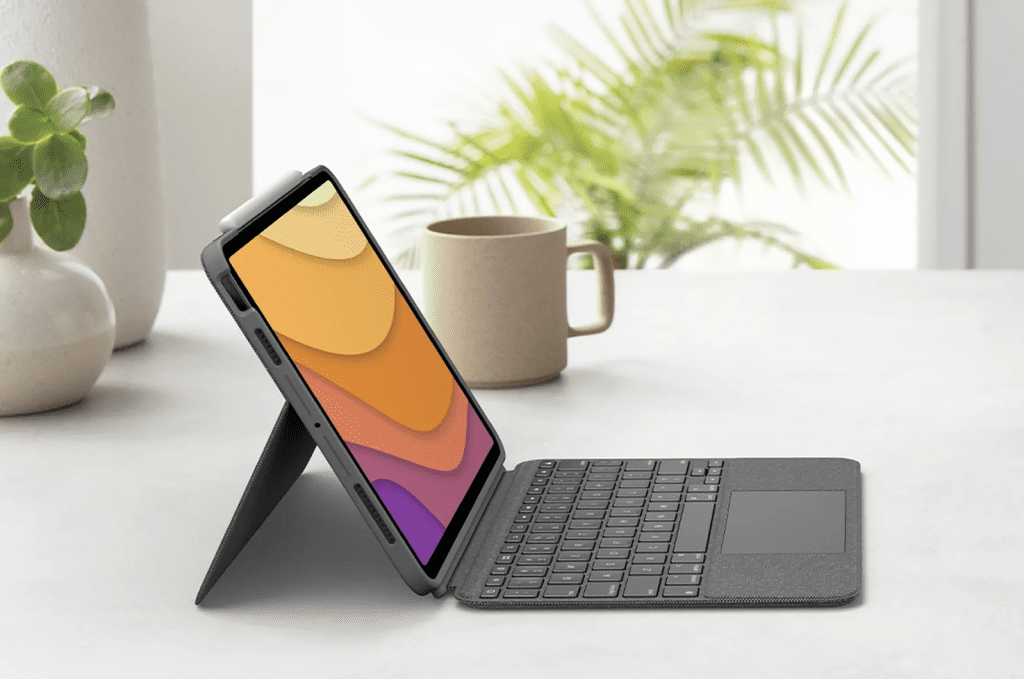 Starting off very strong, the Combo Touch is a Logitech iPad keyboard case that is in direct competition with the Magic Keyboard. The headline features of this model include a large trackpad with gesture support (only one of its kind), a detachable keyboard, backlit keys, extra function keys, a fully adjustable kickstand, and the use of the Smart Connector.

The material is mostly a woven fabric that feels as great as it looks, with the sides of the iPad being protected by a rubber shell. The whole case is a folio-style with a flap that keeps the closed keyboard in place. The flap is also designed to either go over the Apple Pencil or even keep it more firmly in place in a slot in the flap. 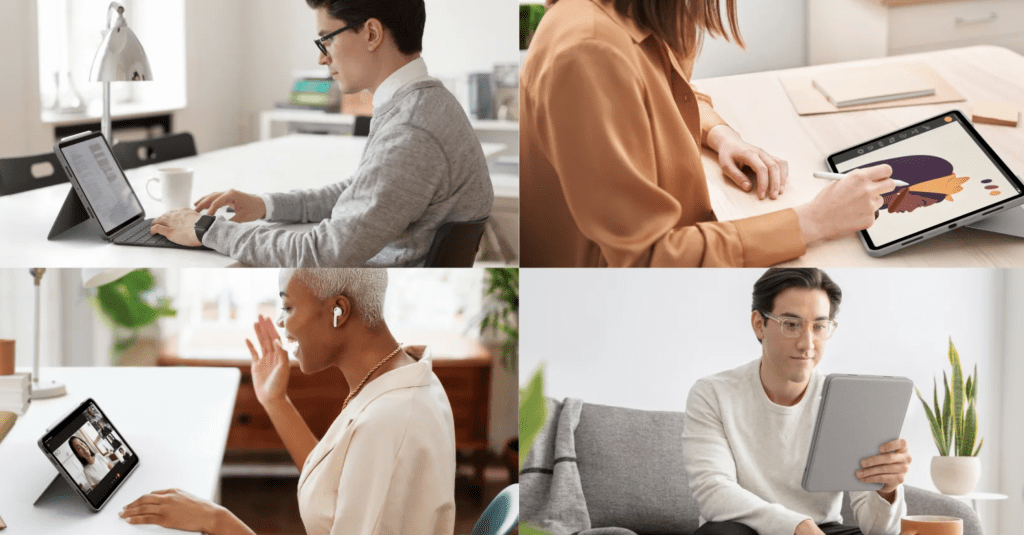 Here’s an area that the Combo Touch beats the Magic Keyboard in Lapability (credit to Jon Rettinger for coining the word in his Surface Pro review)! The Magic Keyboard is not the most lapable extension to the iPad. In a lot of cases, when we put a laptop on our laps, our legs are slanted and not completely straight. If the iPad with the Magic Keyboard is tilted back a little more than it’s supposed to, it might fall off of your legs! So, you need to keep your hands on the keyboard at all times for peace of mind. But with the Combo Touch, the kickstand prevents it from falling no matter the angle.

The Combo Touch, however, doesn’t move around much because the keyboard is attached to the iPad with a piece of sturdy fabric that has a lot of give. In this way, moving the keyboard doesn’t necessarily translate into moving the iPad, making the whole experience of typing and using the iPad on a lap that much more stable.

The ability to detach the keyboard from the iPad gives the cover a whole slew of use cases. There is, of course, the typing mode, which is the standard use case of the case with the keyboard staying attached. If you’re reading something or want to hold the iPad in your hand, you can flip the keyboard and have it out of the way (or detach it). You can also extend the kickstand completely if you want to have a slight angle between the iPad and the surface it’s placed on for some sketching. You can also just detach the keyboard and have it out of the way when you want to watch a movie, on a surface, or on your lap.

You should note that the trackpad on the Combo Touch is the only third-party trackpad that offers smooth scrolling and 3-finger gestures, which is a significant plus-point over other competing products like the Brydge+.

Overall, the Combo Touch Logitech iPad Pro keyboard case is one of the most premium competitors to the Magic Keyboard, and for good reason. It trades blows with the Magic Keyboard and manages to hold its own while being about AED 400 cheaper. It offers better protection, extra function keys, is backlit, and is more versatile. 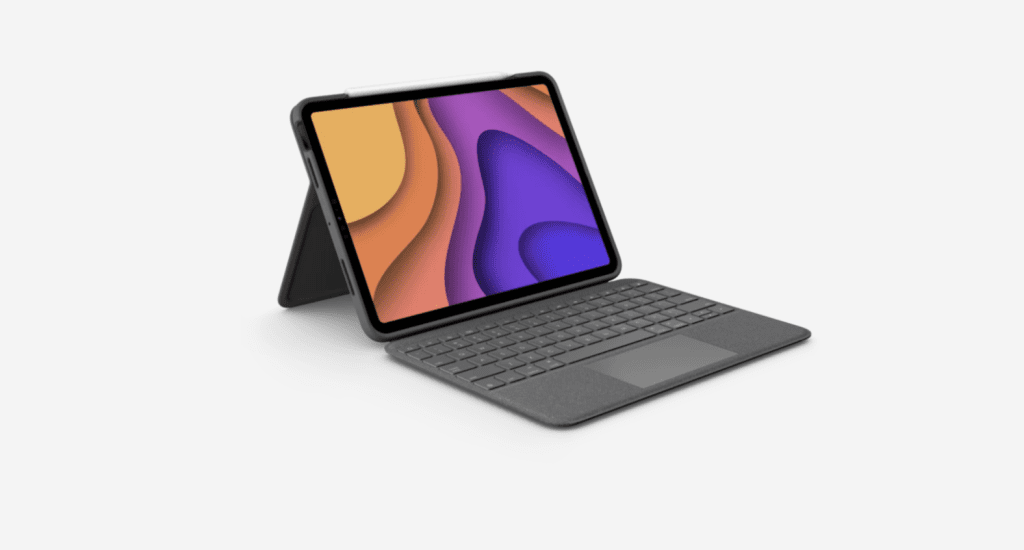 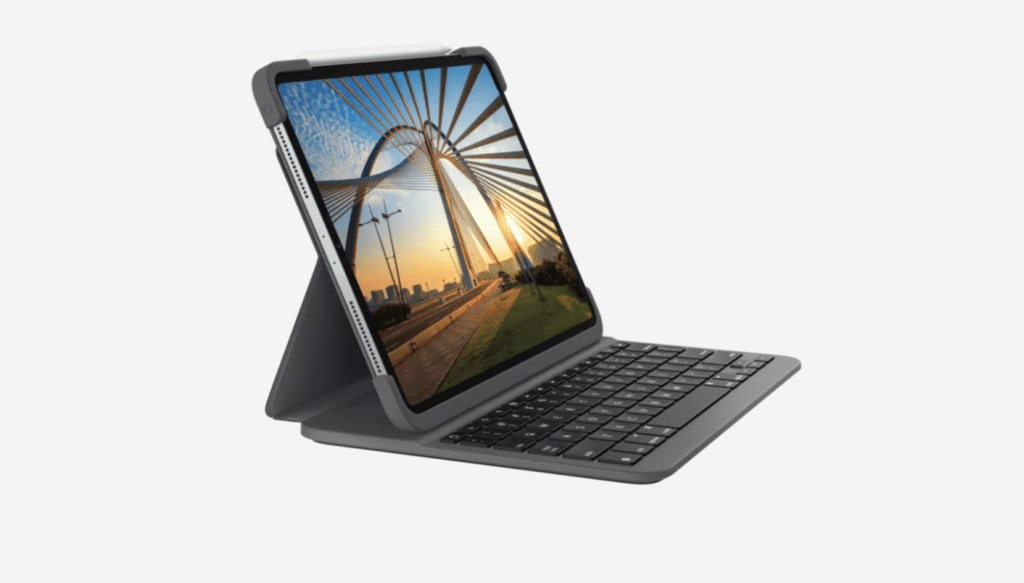 If you aren’t into the idea of replacing your laptop with an iPad and are cool with having the iPad as a companion device and just want some extra functionality with it, you can go for the keyboard-only Slim Folio Pro.

The Slim Folio Pro is Bluetooth enabled, but smartly enough, it will turn itself on when you dock the iPad into position to start typing! Once you are done typing and folding the iPad, the keyboard will turn off to conserve the battery. It’s still a backlit keyboard with extra function keys at the top. 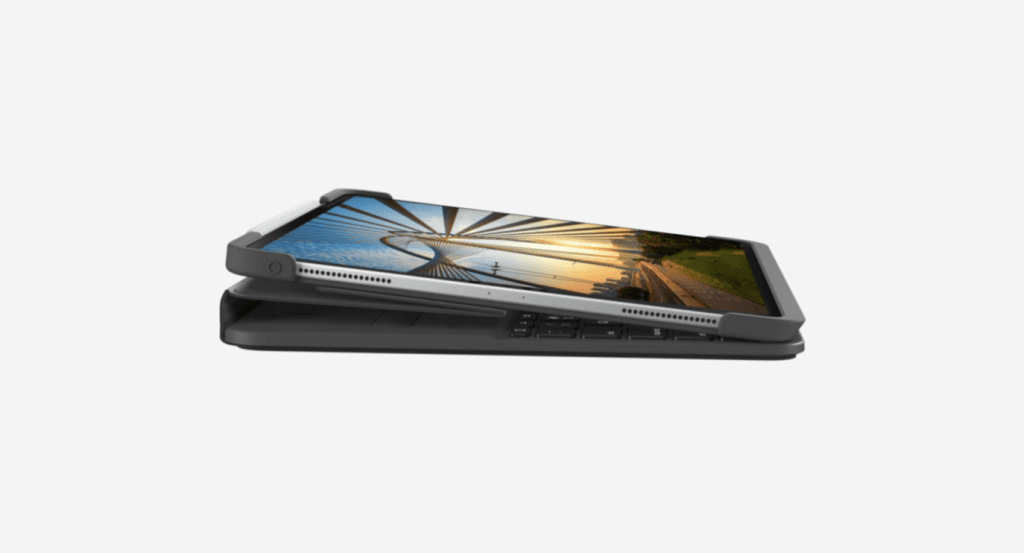 The keys themselves have decent travel and offer a much more laptop-esque experience than Apple’s Smart Keyboard Folio, which is much flatter, with shorter key travel. It also offers more viewing modes than Apple’s two viewing angles.

For instance, reader mode allows you to fold the keyboard behind the case and get it out of the way, sketch mode is for when you want only a slight angle between the iPad and surface with the kickstand extended almost all the way, and of course, the good old typing mode. The infinitely adjustable kickstand gives you the option to get the viewing angle just right and doesn’t lock you into two or three fixed positions (for those of you who happen to be Surface users, remember Surface Go’s kickstand?).

If you also have the Apple Pencil (which you probably do, because who buys an iPad Pro without the pencil?), the magnetic flap has you covered. You can either just put the flap over the pencil while it’s charging or slide it into the slot inside the flap for a more secure fit. 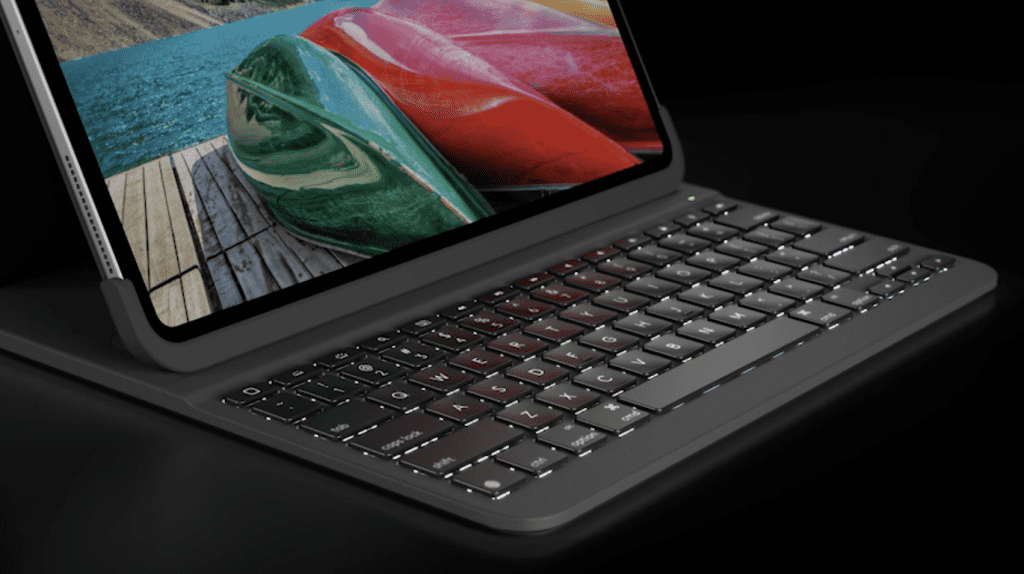 So, if you are looking for a case that protects your iPad while looking stylish and offering a lot of versatility, look no further than the Slim Folio Pro iPad keyboard case by Logitech!

There are also Slim Folio cases that offer the same features at a lower price made for the entry-level iPad and 3rd Gen iPad Air. 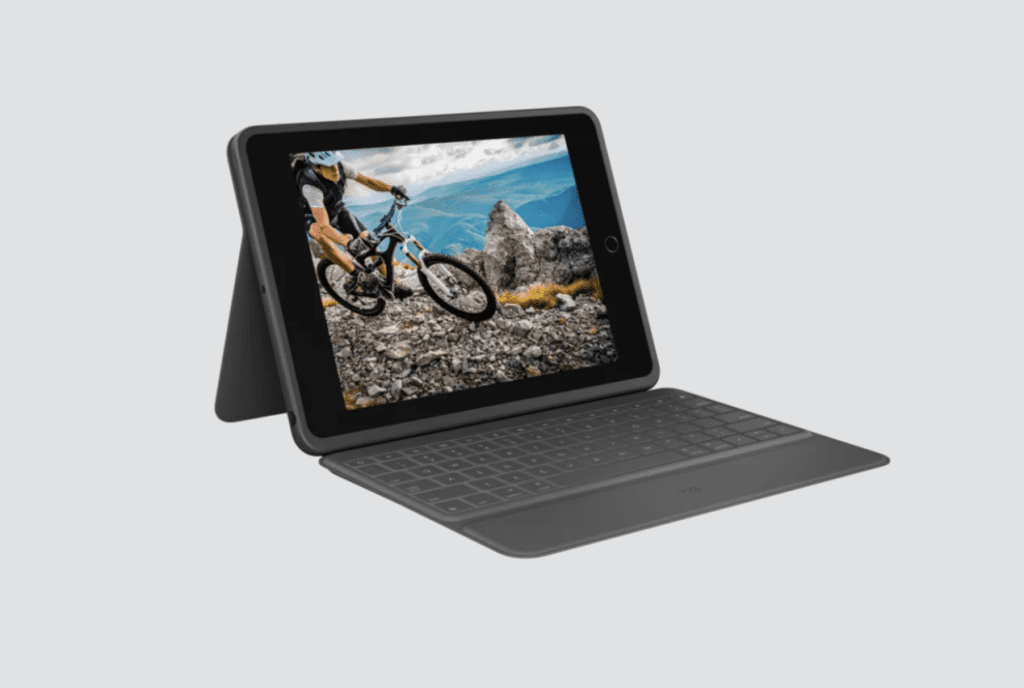 Aptly named, the Rugged Folio’s main feature is its resistance against the elements (except maybe fire). If you are clumsy with your stuff, you should definitely think about getting an extra protective case for your iPad. The Rugged Folio offers military-grade protection against drops with its thick rubber pads all around.

But even better than that the case is spill resistance! So, drink your coffee in peace and fear not if you spill the whole cup on the keyboard because the keys are completely sealed. Although surprisingly enough, this did not result in the keys being mushy or losing their tactility. 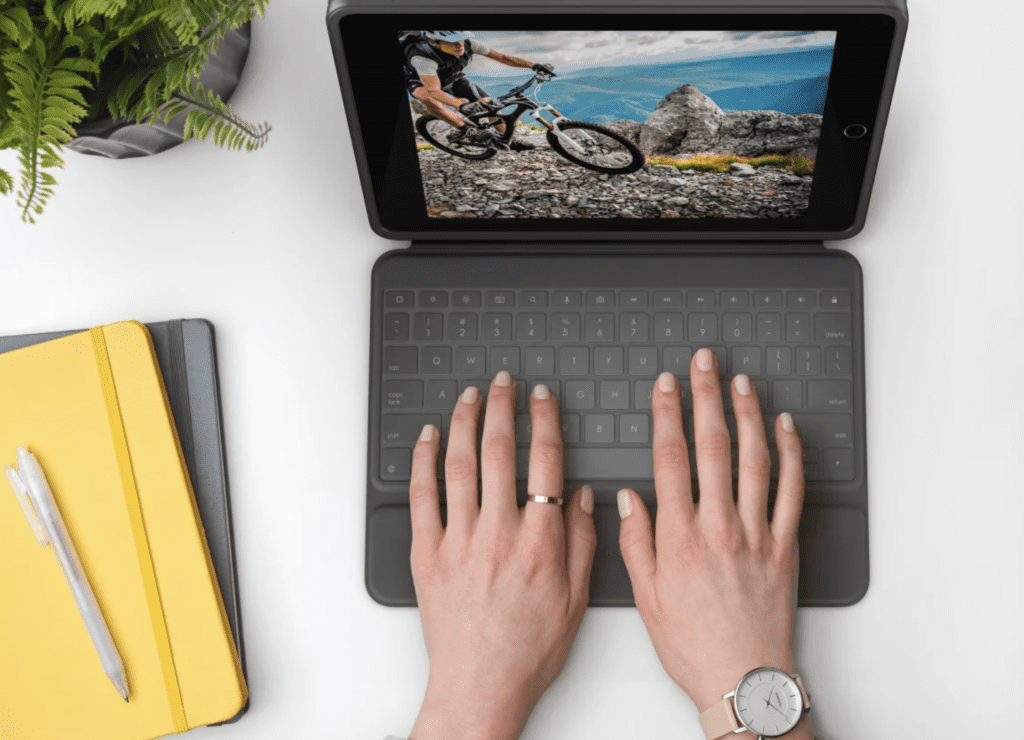 The keys are still signature Logitech style and offer great feedback, as well as a more than decent key travel to make it worthy of its brand name. Aside from the rubber padding around the device, you have a durable canvas-like material on the outside and a soft-touch rubber on the inside.

The magnetic flap also makes its return here with a special slot made for the Logitech Crayon. Another great thing about the keyboard is that it uses the Smart Connector! This means instant pairing without the (albeit minor) hassle or lag of using Bluetooth to connect. You also wouldn’t need to charge the keyboard as it draws its power from the Smart Connector. Lastly, the Rugged Folio is designed only for entry-level iPads.

With all the features covered here, the Rugged Folio Logitech iPad cover with keyboard is still less expensive than Apple’s own Smart Keyboard Folio. If you are looking for a rugged, spill-proof keyboard case that isn’t too bulky and doesn’t sacrifice typing experience for durability, you would be hard-pressed to find a better option than the Rugged Folio. 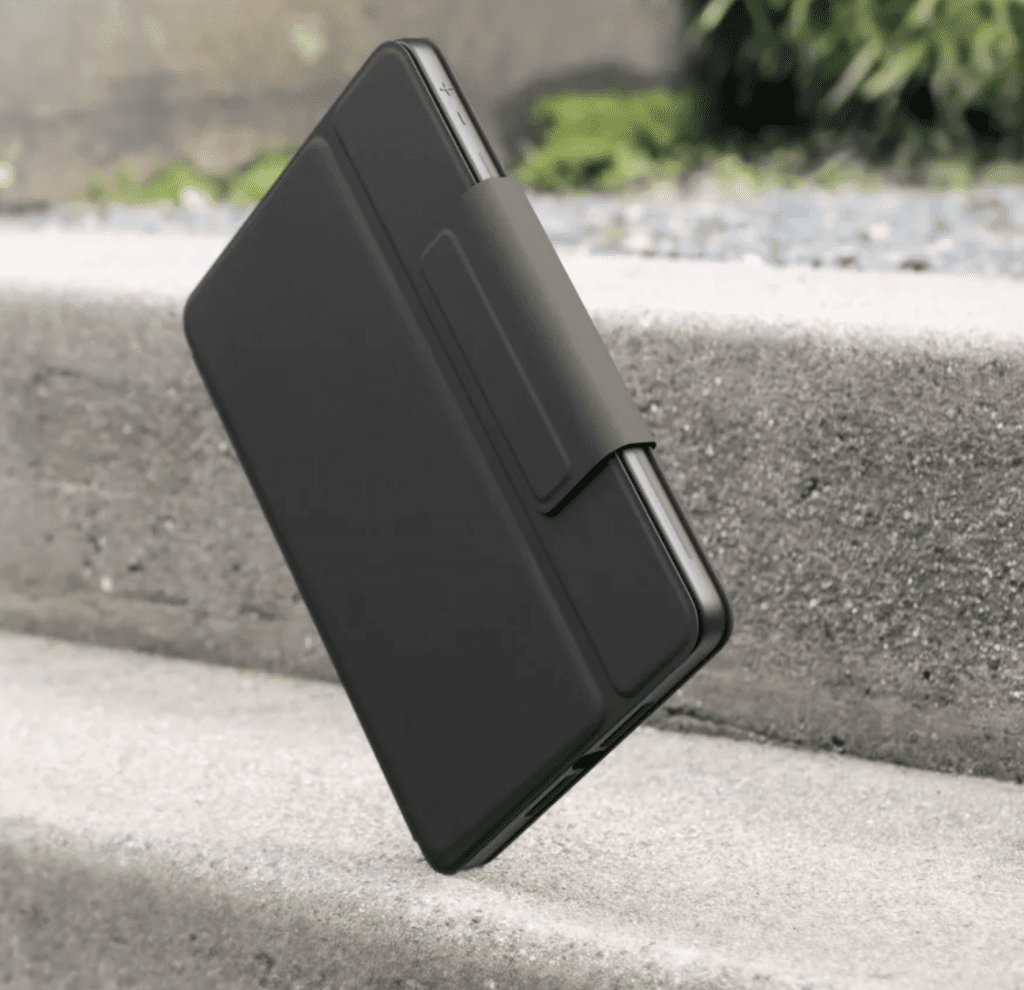 As an official Logitech distributor in the region, Newcom offers the above-mentioned Logitech iPad keyboard cases alongside many more iPad covers, cases, and keyboards. If you are interested in any of the models discussed in this article, please make sure to check out our products page. For further information or any inquiries, make sure to directly call us or reach out through our contact us page