“Spark your Senses” an event of Samsung powered by NEWCOM

Starting on December 16, 2021, Newcom, in collaboration with Samsung, held the one-of-a-kind “Spark Your Senses” event at Al-Ain Centre, located in the heart of Dubai’s IT market. The event, which attained great success in the eyes of visitors and IT industry members alike, aimed to expose Dubai community members to Samsung’s latest monitors by offering them a distinct and engaging experience.

The event featured a wide variety of Samsung monitors––wide, flat, curved, OLED, gaming, professional, and more––including some of its most impressive models like the Odyssey gaming series and the Smart monitor series.

To conduct an experience that would last in visitors’ minds was exceptionally spot-on, Newcom opted for a minimally designed exhibit floor using subtle yet sophisticated décor that helped the monitors stand out. This design had a calming effect on the eye and made it very delightful for visitors to look around and compare the variety of models. Moreover, Newcom offered visitors the chance to engage with the monitors. Various stations around the event floor allowed visitors to sit behind gaming chairs and casually enjoy a racing or FIFA game. Those who purchased a smart or gaming Samsung monitor from one of Newcom’s partners had another thing to be excited about: a scratch-and-win opportunity. Purchasers would scratch a card after their purchase, with the chance of winning a Netflix subscription if they had purchased a smart monitor, or a variety of gaming accessories if they had purchased a gaming monitor. 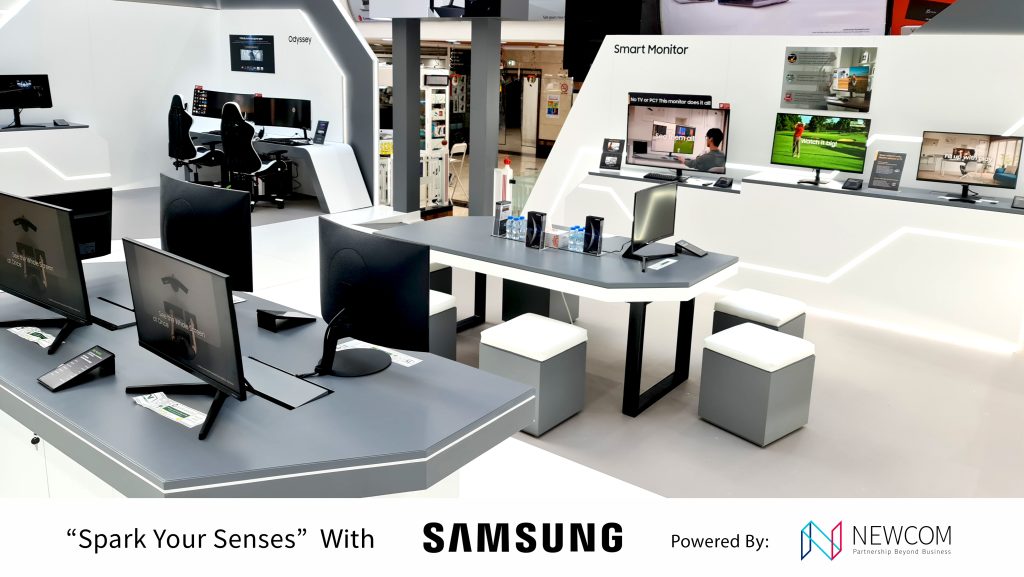 But that was not where the fun ended. Newcom also held an invite-only FIFA tournament, where players competed against each other at the “Spark Your Senses” using Samsung’s top-notch gaming monitors. The games started with eight players, comprising of gamers and influencers, competing in four matches. Four winners of the first round went off to play in the semi-finals. Semi-finals winners Kaushik Subramanian and Alister Ralf played against each other in the grand finale, with Ralf announced as the lucky winner. The winner’s prize? The phenomenally designed, newly released Odyssey NEO G9 monitor, worth AED 7,644. 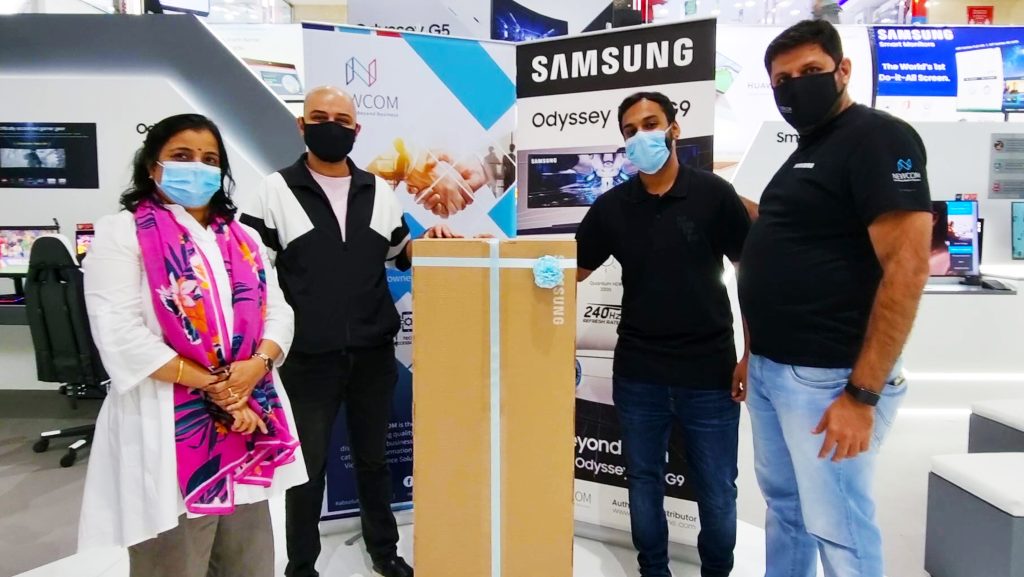 Of the many positive impacts Newcom’s event had, two merit discussing the most. First, the event encouraged consumers to engage with products and test their features in person. With COVID-19 prohibiting many from leaving their homes for months, many fell into the habit of purchasing items, big or small, online and without giving them a try first. Without the ability to try a product in person and test it against other options, many people will inevitably find it difficult to make the right choice. By conducing the in-person “Spark Your Senses” event consumers were exposed to new products and had a chance to familiarize themselves with their features. This allowed them the added advantage of noticing the benefits of a product that they may have otherwise not noticed when reading reviews about them online.

Second, the event successfully fostered relationships between consumers and the local retail IT economy. With the rise of online retailers, it has become more difficult for smaller shops to attract end-consumers. Given the importance of these businesses to the local economy and their historically significant role in Dubai’s IT market, Newcom hoped to bridge the gap between end-consumers and these often family-owned smaller retail businesses. The “Spark Your Senses” event allowed Newcom to fulfill its hope by gathering visitors for a unique experience with Samsung monitors, which prompted many of them to purchase from one of the shops located in Al-Ain Centre.