Since the opening of the envelope in the original MacBook Air advertisement, perhaps nothing has been quite as disruptive in the laptop market as the Apple Silicon. The efficiency and command of the four M1-powered Macs have left consumers wanting and expecting more from their computers at lower prices.

In this article, we’ll review the Apple M1 chip’s emergence, explore how it allowed Apple to inhibit its competition, cover some of the M1 chip’s pros and cons, and anticipate what its existence means for the market going forward. 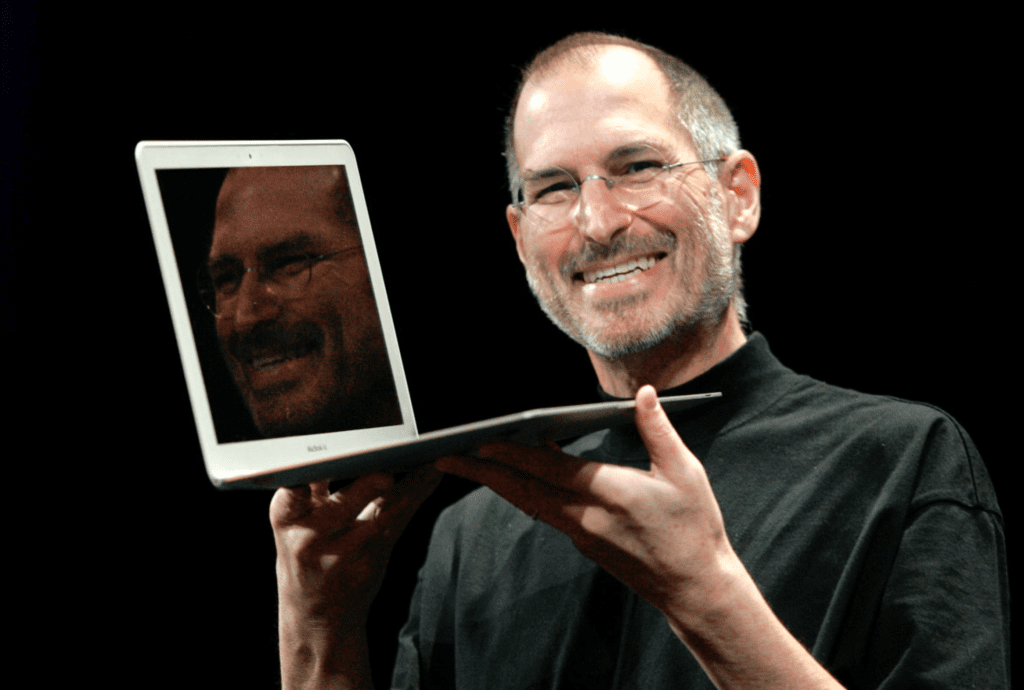 Prior to November 2020, if you were in the market for a MacBook, you had to take a few things into account––your budget and expectations being the main ones. If you were strapped for cash and wanted to go with the cheapest MacBook you could find, you were getting an Intel Core-i3 dual-core processor that was great for day-to-day tasks such as media consumption, web browsing, and editing documents, but not much else.

However, if you were going to use your computer for something more demanding than that, say for video editing, you needed to up your budget and look at some of the Pro options, and prices could get steep.

Apple’s laptops were never quite known to deliver great value for the price. You probably didn’t buy a MacBook because it offered the highest horsepower, but because you wanted the legendary build quality, the great speakers, the great display, the long battery life, the trackpad, and of course, for macOS. Or you bought an iMac because it was a one-cord desktop computer that looked super clean and had a beautiful display with great build quality. Because of these features, you were willing to sacrifice a bit of horsepower that you otherwise would have gotten if you went with a similarly priced Windows computer. But since the introduction of the Apple silicon chip, the tables have turned!

Today, if you are in the market for a laptop with $1000 in your pocket, you cannot find one more powerful than the M1 MacBook Air (unless you are looking for a gaming laptop, in which case, this would not be true). This laptop changed the entire landscape of laptops worth around $1000.

Previously, users adjusted their expectations when they wanted to buy a $1000 laptop. You’d have to ask yourself questions like, “Do I want an ultraportable laptop? Then I will have to sacrifice performance” or “Do I want a high-performance laptop? In that case, I need to sacrifice portability and battery life, and I would still be far away from the most powerful laptop.” But the $999 MacBook Air changed all of that by offering high performance and portability. 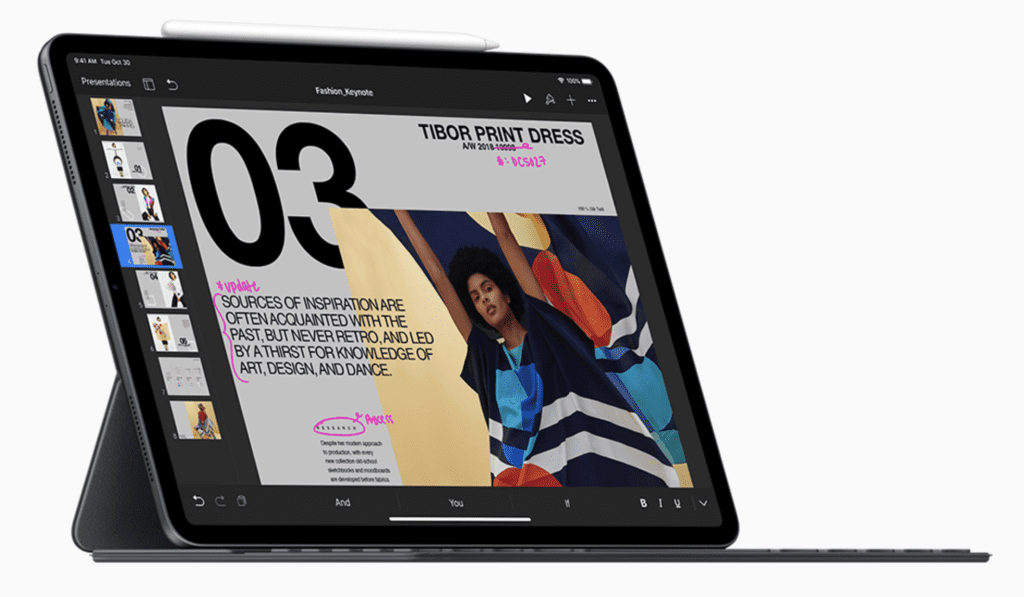 From A12X to the Apple M1 chip

If you have been following the evolution of the iPad Pro over the years, none of this would come as a shock to you. The release of the 2017 iPad Pro 10.5 with the A10X fusion was the first time Apple A-series chipsets started to get dangerously close to the performance of many Intel-powered laptops; that was precisely when Apple started touting the iPad Pro as more powerful than 92% of personal computers.

With the completely redesigned 2018 iPad Pro, the A12X Bionic processor benchmarks went even further and put many Intel CPUs to shame. Thus, the iPad Pro’s position was cemented in the market as a strong competitor for many laptops. The iPad Pro was at this point faster and much more efficient when compared to all Surface Pros, and even many MacBooks! It was only a matter of time before ARM made its way to the Mac.

Sure enough, a year after the release of the redesigned iPad Pro, Apple announced they would be switching from Intel to Apple Silicon and released a dev kit Mac mini with an A12X inside to get developers up and running, preparing them for the when the transition has officially begun. Apple finally announced the start of the transition in November of 2020. 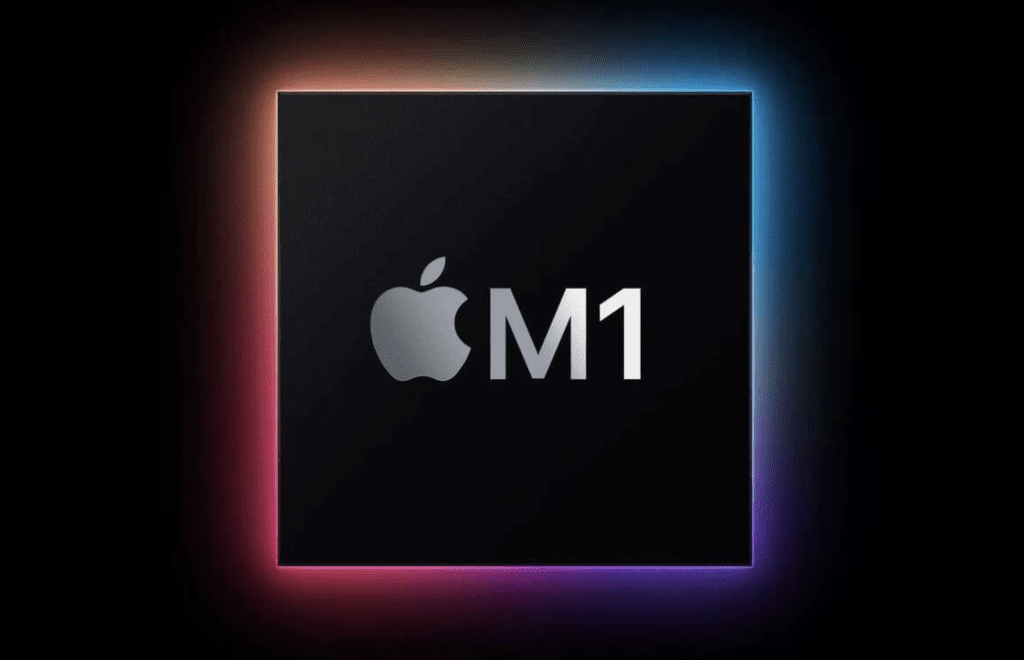 Best of both worlds

That was the story of the Apple M1 processor’s emergence in a nutshell. Today, you no longer have to choose between a high-performance/high-TDP processor and a mobile, efficient low-performance processor; you can have the best of both worlds!

The Apple M1 chip has an 8-core CPU made up of four high-performance and four high-efficiency cores that deliver some truly unbelievable performance per watt. In fact, the M1 uses only about 32W under maximum load and 2W on idle. Comparing those numbers to the 2016 6-core Core-i7 Mac mini that used 20W on idle and 122W under maximum load, it’s clear why the M1 has been disruptive and revolutionary.

It is indeed these performance per watt numbers of the Apple M1 processor that make the current-gen MacBooks have a 50% better battery life than the last-gen models, which already had industry-leading battery life.

This super-low thermal design power also means that the chip doesn’t produce much heat, making it very easy to cool, even passively. In fact, the MacBook Air no longer has a fan inside it. This is a first since 2015 12” MacBook, which was also passively cooled, just with the caveat of having a very weak processor.  And you would even be surprised that CPU throttling issues are not an issue with the passively cooled Air. Of course, there is some throttling, but it’s minimal and barely noticeable in your workflow––the M1’s performance still remains relatively close to the other actively cooled Macs.

Now, do not be misled. Just because the CPU on Apple’s M1 chip works quite well without active cooling, it doesn’t mean that the system cannot benefit from cooling. For instance, even though there isn’t much difference between Apple’s various Mac offerings, the Mac mini is now technically the most powerful M1 Mac because of its active cooling advantage over the MacBook Air and even the Pro (the Pro has active cooling but the chassis of the mini allows for even better cooling). 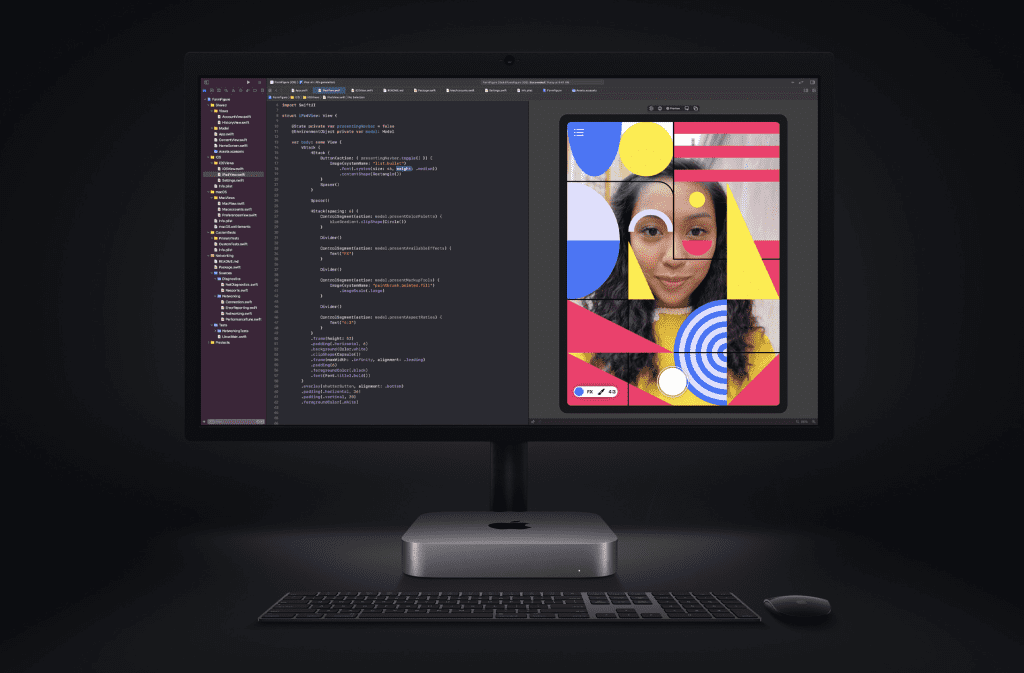 System on Chip (SoC), not CPU

A significant reason for the ridiculous performance and efficiency of the M1 is that most components a computer needs are packed into a 5nm architecture “System on Chip”. The CPU, integrated GPU, storage, RAM, SSD controller, security enclave, and more, are all soldered onto the SoC and communicate directly, making the motherboard comically small (if you are interested in finding out the Apple M1 chip’s specs, be sure to check out Apple’s website).

Because of this, you will find that the Mac mini is mostly empty if you open it up. If Apple had put just a little effort into it, they could have made the world’s smallest high-performance computer, because let’s not forget that in the end, the M1 is essentially a high-performing “mobile” processor.

But maybe Apple didn’t want the Mac mini to be the star of the show and steal the spotlight from the MacBooks, or maybe they were on the clock and couldn’t spend time redesigning one of their unpopular products since they had to preserve that effort for the 24” iMac. 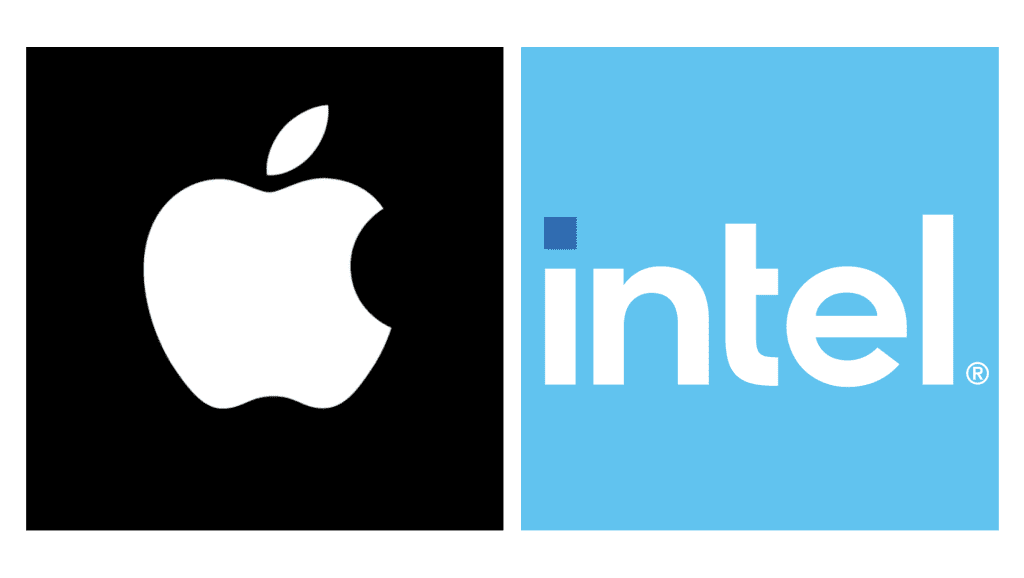 The Apple M1 vs. Intel chronicle

Another interesting development in the M1 chronicle is how Intel responded to the growing threat of Apple Silicon. They did what no major contender should do; they acknowledged the threat M1 poses, and not in the best possible way.

The campaign focused on the great variety of form factors that Windows devices have, alluding to the limited choice users have when buying a MacBook. Fair point. Intel also flexed the gaming capabilities of many Windows laptops and made fun of Apple for not being a contender when it comes to gaming-capable machines. Another fair point.

But sadly, Intel’s Apple vs. Intel campaign made no mention of CPU horsepower, efficiency, battery life, or performance, things that an average user considers. And this did not exactly bode well for Intel as many consumers mocked Intel’s efforts and pointed out that the company seemed to have felt threatened by the new lineup of Macs.

Another company that fell into the same trap was Microsoft. Microsoft also launched a campaign to promote their new lineup of Surface products by comparing them to iPads and MacBooks, by poking fun at the supposed limited feature set of iPads and MacBooks.

But Microsoft too failed to talk about many of the genuinely important features that are important for most consumers, and in which Apple has a clear leg up. For example, Microsoft did not compare battery life or performance, which was one of the primary reasons for the disruptive nature of the M1 Macs. Instead, they focused on superfluous differences like how a MacBook is just a laptop and can’t turn into a tablet or how the iPad Magic Keyboard is heavier than the Surface Type Cover. 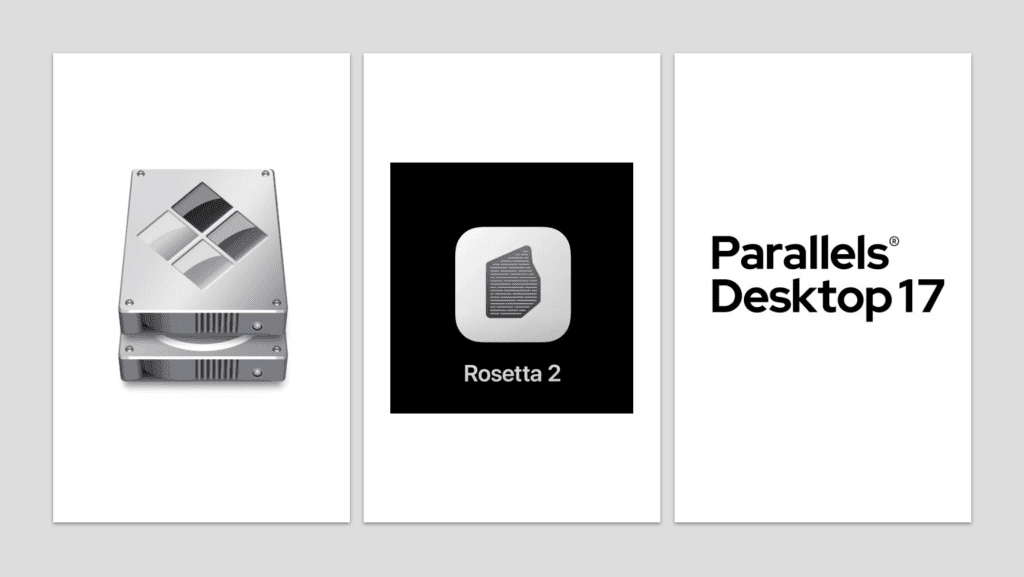 If this article is going to be a fair Apple M1 chip review, we must cover the M1 chip’s pros and cons, and when it comes to the cons, there are definitely a few you should know about.

The number one concern is potential issues related to the Apple M1 and compatibility with various programs and applications. But there hasn’t been a lot because of how Apple’s Rosetta 2 has been able to translate the code of x86 programs to run on the ARM-based Apple Silicon. Rosetta is Apple’s temporary solution for running software that is not written for ARM until the developers compile a native version of the app for Apple Silicon. And generally speaking, Rosetta has been performing very well, sometimes even outperforming Intel Macs in running x86 software.

Not everything is sunshine and rainbows though. For example, BootCamp is not an option for now as ARM is very finicky when it comes to running virtual machines. This also makes Android emulators either unresponsive or very unstable. This might be a big deal for certain developers or people who always relied on BootCamp as a way to be able to use Windows when needed. However, Parallels Desktop has somehow made running Windows on M1 Macs a possibility.

There’s also another issue that is more of an inconvenience, and it is that all the current M1 Macs only support 2 Thunderbolt ports. This is a limitation of the chip rather than Apple intending to cheap out on ports like they sometimes do on the entry-level models of their laptops. But this can be fixed with a hub or a dock so it’s not the end of the world.

Over-hyped, but not under-delivered

What has become clear is that this is one of the very rare instances of insane hype that did not lead to disappointment. The M1 Macs were hyped to no end by Apple and Apple fans, making a lot of people skeptical about whether it would be as good as it was hyped up to be.

Now, you will find very few notable tech figures who would brush off the M1 as unexciting or unimportant. Apple Silicon really did shake the entire computing industry and made it instantly a lot more competitive.

Competition is always great for the consumer because now, Intel and AMD have more incentive than ever to achieve breakthroughs that will help them not fall behind Apple in their own game. This will, hopefully, result in significantly more powerful and efficient CPUs at better prices.

But if they fail to keep up, Apple might prove to be a lot more dangerous than they have been in the past few months if the next version of Apple Silicon proves to be another huge leap forward.

Either way, one thing is for certain: for now, the ultimate winner in this competition is, and will be, the consumer.