Features to look for in an Apple iPad case or cover

Whether you’re looking to protect your shiny new iPad or some extra functionality, it can be difficult to pick between these options as you typically can’t buy a case that is sleek looking and fashionable but also very protective. It’s typically one or the other.

When it comes time to choose an iPad sleeve or cover, you will most likely be confused with the sheer number of options at your disposal. For instance, some covers offer a pouch, which allows for super easy in-and-out motion at the expense of having one end exposed, while others secure the iPad for maximum protection even though taking it will require one or two extra steps. Some covers are super thin and minimal but offer slight protection, while others are bulky, very protective, but often not aesthetically pleasing.

What to look for

Below are the factors you need to consider when purchasing an iPad sleeve, cover, or case. The weight of each item is where your needs and personal taste come into play. 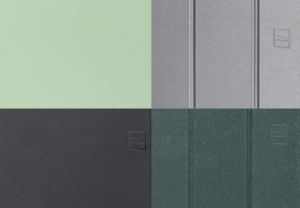 The most subjective aspect of a case is its design, which is a personal choice. You might like the rugged look of a case, whereas someone else might prefer a thin and light case, willing to sacrifice a bit of protectiveness.

But one aspect that is rather objective in design is the material used. If you’ve ever seen a $5 silicone Apple iPad case knockoff and compared it to the real one, you will know how two cases can look almost identical but have a very different feel and durability. The same principle holds true when selecting Apple iPad covers. Try to feel the material on the case, whether it’s the leather (or faux leather) or the protective rubberized plastic to avoid purchasing a cover made of unprotective or cheap material.

Protectiveness and portability almost have an inverse relationship. Typically, the more protective an iPad sleeve or case is, the bulkier it is and naturally less portable. If you’re looking for maximum portability, you should be looking at thinner cases that are lighter and add little bulk. You can even look into iPad skins, which are technically not cases or covers, but at least they do provide minimal protection against scratches. Neither of the last two options provides much in terms of protectiveness, but that’s the price to pay for portability. 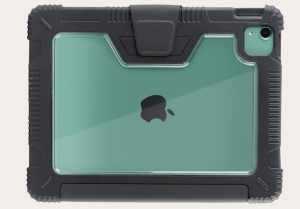 If you’re looking at protectiveness as the primary function of the case you’re looking for, then you’re looking at cases with a lot of rubber used in them; the thicker, the better. You would also be wise in making sure that the case has a decent lip height to protect the front display and the back camera module. If the case also has a lid, then that is an extra level of protectiveness to the screen. Remember though, these cases tend to be heady and difficult to hold for too long.

Some folios go above and beyond (as you will see in the recommendations) and give you Surface Pro-like flexibility by having a rather sticky interior and a fold in the middle of the back of the case to allow the iPad to be used in near infinite angles. This also somewhat deals with the top-heavy nature of the iPad when you fold the folio back into itself, making it much more stable and lappable!

If you already have a use case in mind and know what factors are more important to you, take a look at the following Tucano iPad cases by the Italian brand and see if the feature-sets match your expectations. Tucano iPad covers have character, are usually very protective and versatile, and are among some of the best iPad covers and cases on the market. 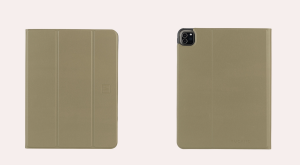 The Tucano Premio is one of the best iPad cases for those who want to protect their iPad in style. This rugged case offers not just a good level of protection but has also been designed in an actually stylish way. The material mostly consists of polyurethane leather, but it masks itself well with its faux-leather look on the outside. The colors that the case comes in are very unique; from the muted petrol-blue and military green (which looks more beige than green, to be honest!) to the flashy yellow and the classy and discreet black. 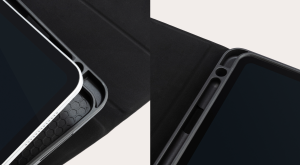 The inside of this Tucano iPad case has a honeycomb-like texture that provides a very decent cushion between the iPad and the outer side of the case, which dissipates the pressure much more effectively in case of an impact than if the iPad was sitting flush with the interior.

Perhaps the biggest selling point of this Apple iPad case is its versatility. All folio cases allow a certain level of flexibility by offering two standing positions, one better for viewing content and work and the other better for drawing. The problem with these two angles is that, while useful, there is no in-between position. With this case though, the faux leather wrapped around the rubber back folds two-thirds of the way up and can be used to prop the iPad on the sticky inner surface of the folio in infinite angles. This way you can prop the iPad to sit perfectly perpendicular to your line of sight for the best viewing experience. The only downside with this extra feature is that the lowest angle in this mode is a bit too wobbly for writing/drawing, so the traditional folding back of the folio onto itself is recommended instead. 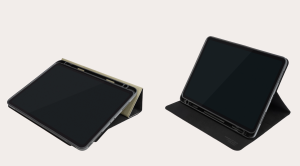 There is also a slot in the folio to store your Apple Pencil. But if it’s running low on battery, you can still magnetically attach it to the iPad despite the protective rubber around the whole tablet.

You might also be pleased to know that this Tucano iPad case is made of 65% recycled plastic material, amounting to approximately 3 PET water bottles. Go eco-friendliness!

The Tucano Tasto case is designed to be a functional and versatile keyboard case. It offers a quick and unique way to prop up the iPad without having to fold the three creases of a folio back onto itself. This Apple iPad case also offers a removable keyboard flap to make it as versatile as possible. When you don’t need the keyboard, you can use the simple protective flap in the package instead of the keyboard flap to reduce the weight of the device.

Covered in all black and with a granular texture on the flap as well as most of the back, this Tucano iPad case’s design is rather modest. While the Tasto case can only be propped up at one angle, that one angle can be achieved very easily. You just pull down on the flap at the back and you have your stand! 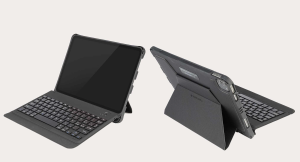 The keyboard that comes with this case is Bluetooth, so there’s no need to attach the flap to the rest of the case if you wish to type from a distance. The versatility of not having to use Apple’s Smart Connector, however, comes at a slight hit to seamlessness, since connecting and disconnecting Bluetooth keyboards has never been the quickest.

Other than that, this Tucano iPad case is a functional and versatile keyboard case at a reasonable price for what it offers. It offers complete protection alongside a pencil holder, a kickstand flap at the back, and a simple folio or a Bluetooth keyboard folio for extra versatility. 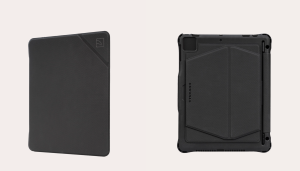 The Rugged Case is in many ways similar to the Tucano Tasto case. It has a kickstand flap at the back and a removable front folio. The detachable, military-grade TPU can be used alone as a back cover independent from the folio. Something to note about the folio itself is that if you want to fold it back but not detach it, you can still use the camera as there is a crease near where the camera would be that you can fold to get the folio out of the lens’ field of view!

This Tucano iPad case is a very protective and versatile case with a kickstand that can help you prop the iPad easily in two positions; standing upright and drawing mode. The folio is removable as well and with a smart design to allow for camera usage even when it’s folded on the back of the device. 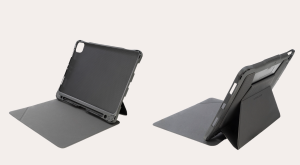 As an official Tucano distributor within the Middle East and North African region, Newcom offers a wide range of Tucano iPad covers and cases, including the Apple iPad cases mentioned in this article.

To make sure you are the first to find out about the latest Tucano releases in the region, be sure to frequently check out our blog posts.