In November 2020 and at the peak of COVID-19 fears, Samsung released a set of displays on the market. The timing of it could only be described as genius marketing. In many ways, the M5 and M7 Smart Monitors felt like the perfect addition to the stay-at-home life by blurring the line between a monitor and a smart TV.

The smart monitors series cannot exactly be categorized as monitors because monitors don’t run their own operating system and can’t stream YouTube or Netflix on their own with a remote that comes in the box. They are not, however, just smart TVs either because smart TVs don’t feature VA panels and often do not support USB-C display inputs. As we all started spending a lot more of our time in our rooms working and playing, the M5 and the M7 were introduced to act both as our work/play monitors when we’re at the desk and as our smart TV when taking a break to watch our favorite show.

The smart monitors were received very favorably by reviewers from the moment they landed in the market back in 2020. The sales made it so that Samsung decided to expand upon the original lineup with a couple of different sizes for their existing M5 and M7 models and an entirely new M8 model. Keep reading to know more about the entire Samsung Smart Monitor lineup and find out what’s new with them.

Released alongside the higher-end M7, the Samsung M5 monitor had one agenda: include as many features and connectivity options as possible into a highly affordable package.

The smart features begin with the TizenOS that runs in the M5. It allows you to use the M5 just as you would use a Samsung smart TV; you can browse the web, watch your favorite creator’s latest uploads on YouTube, or catch up on the latest episodes of your favorite shows on popular streaming platforms such as Netflix, Prime, and Apple TV+. You can even use the monitor to get some work done through Microsoft Office as the M5 runs the full suite of Office 365 apps, without the need to be connected to a computer.

As useful as the standalone features may have been to some, the more useful, and exclusive, feature added to the Samsung M5 monitor’s specs is how easy it is to mirror the display on your phone, tablet, or laptop onto the monitor.

If you have a Samsung Galaxy phone (that supports DeX), you will be able to turn your phone into something akin to a Chromebook. If you have a high-end Galaxy phone, you can do all of that wirelessly. But if you are only after mirroring your display and don’t necessarily want to turn your phone into a computer, you only need to tap your phone on the edge of the display after you’ve downloaded the Samsung SmartThings app on your Android device. Alternatively, you can just tap the Cast button on the content you are watching and select the Samsung M5 smart monitor in the list of available displays. 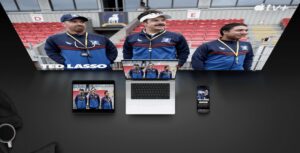 Android users have always had the option to turn their TV into a smart one by simply buying an Android TV stick, like a Chromecast. While it wasn’t the most elegant, baked-in solution, it got the job done. But for iOS users, the only way they could mirror the display on their iPhone/iPad was to splurge at least $200 for an Apple TV.

No longer does Apple have a grip on their users’ mirroring needs! A huge selling point of Samsung’s Smart Monitors lineup for iOS/macOS users is that they are the only third-party display that supports AirPlay 2. This means that if you are an Apple device owner, you won’t have to fiddle with ridiculous display dongles to whenever you want to lay back on the couch and watch a movie with your monitor.

If you want to go one step beyond mirroring a device that is there with you, you can use the Remote Access feature. It works exactly like any remote desktop software would on a computer; you can connect your mouse and keyboard to the Samsung smart monitor and access your computer over the web. The quality of the connection, of course, dictates how good/bad your experience will be.

The connectivity options that the Samsung M5 monitor crams into such an affordable package are truly remarkable. So remarkable that Samsung added another size and another color to the M5 roster. You will now find this Samsung smart monitor in white and black at 27” and 32” sizes with the new 24” model coming only in black color. 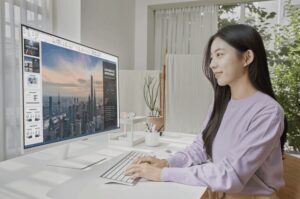 The Samsung M7 monitor features the same plethora of connectivity options as the M5 with a couple of very noticeable extras.

The Samsung M7 monitor’s input/output options offer the ability to connect a laptop to a display via the USB-C connector that also doubles as a charger for your laptop or smartphone. It isn’t Thunderbolt 3 certified, but it does offer pretty much all the benefits that would come with it.

The M7 also offers the Remote Access feature to connect remotely to your computer over the web, wherever you or your computer may be, AirPlay 2 for quick and hassle-free mirroring of your iPad/iPhone display, TapView to allow all Android devices to mirror the content on the screen with a simple tap of the phone on the edge of the display, Cast to allow android phones to share their screen without needing to be close to the display, and wireless dual display to mirror/extend a Windows laptop display over the local connection.

The other improvement to the Samsung M7 monitor’s specs over the M5 is much more significant; the M7 packs 4x more pixels! Even at 4K, the Samsung M7 smart monitor still remains impressively affordable. Compared to the other smart monitor 4K displays in its class, it offers so much more in terms of features that make the M7 a league of its own in terms of value for money.

The M7 4K UHD smart monitor was received very well in the tech community. Thus, Samsung showed it some love by adding a larger canvas to the M7 lineup. Now you will find the M7 at both 32” and 43”.

While on paper the M8 doesn’t seem to be too different from what the Samsung M7 monitor specs offered, it still has quite a few tricks up its sleeve to make it a unique enough offering and justify the substantial price increase!

The M8 is the most distinctive looking of the three options in Samsung’s Smart Monitor lineup, with four colors to choose from Spring Green, Sunset Pink, Daylight Blue, and Warm White. Staying with the design and form factor, it is actually more versatile than many competing monitors. It has tilt functionality but also an elegant height-adjustable stand that is not commonly found in competitors. Another distinctive design feature is the unique herringbone texture on the back, which is definitely a step up from the bland textures found on the M5 and M7.

The other big difference between the M5 and M7 and the M8 is the addition of the snap-on webcam. The 1080p webcam found in the box with the M8 snaps onto the back of the monitor through a 4-pin magnetic connector with no effort and pops off with a gentle tug. The design makes so much sense that it’s baffling that no other manufacturer has ever tried this.

Other than the above features, the M8 offers the same connectivity options as the M7 (with the two HDMI-ins replaced by one micro-HDMI and one extra USB-C input). The M8 is the most feature-packed monitor on the market and in the Samsung Smart Monitor lineup. It comes with a much-improved panel capable of reproducing 99% of the color gamut of sRGB standard, making it also a viable option for professionals too as opposed to being only geared for entertainment. The M8 comes in white and three other pastel-looking colors at 32” to be the perfect blend between a monitor and a small TV.

We delved a lot more deeply into the newest addition to the M-lineup of Samsung smart monitors. You can find the full article about the M8 here. 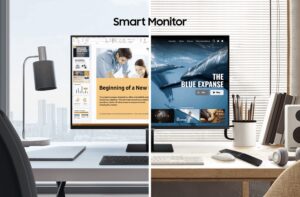 As an official Samsung monitors distributor in the Middle East, Newcom offers a wide range of Samsung monitors, including the Samsung M7 monitor, M5, and M8 mentioned above.

To make sure you are the first to find out about the latest Samsung Smart Monitor releases in the region, be sure to frequently check out our blog posts.