Introducing the Logitech MX Keys Mini: A review of the perfect compact keyboard

The Logitech Master series’ mice and keyboards have been around for a while, and they have been incredibly successful products. The MX Master mouse lineup has become a staple in the industry is the go-to mouse for many, despite the premium price tag it comes with. Logitech tried to implement the same philosophy into their keyboard lineup with the MX keys series, and it has worked. Now, alongside the standard-sized Logitech MX Keys wireless keyboard, we also have a more compact version of it, called the Logitech MX Keys Mini. 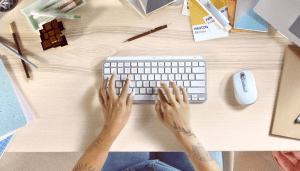 It is a compact keyboard that is slightly larger than an Apple Magic Keyboard. It can be easily paired with three devices, and you can switch between them quickly with the press of a button. The keys travel very well, and the keyboard comes in three slightly different versions: MX Keys mini standard, MX Keys mini for Mac, and MX Keys mini for business.

In short bullet points, you will know about all the minor differences between the three models of the Logitech MX Keys Mini lineup: 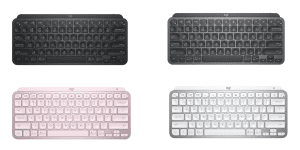 The MX Mini keyboard is backlit and features a metal chassis and square keys. It’s made of a combination of aluminum and durable hard plastic. The keyboard is already elevated a bit so that it sits at an angle that will allow comfortable typing. There are also rubber feet at the bottom of the chassis that keeps the keyboard firmly in place.

You may notice that the shape of the keys is a bit intriguing. They all have circular indentations as opposed to being flat. This is Logitech’s approach in all their Master series keyboards, and it is done to make the keys a bit more reassuring to the touch and allow you to tell the keys apart a bit easier without looking.

The indentation is subtle though; so, if you end up not caring for it, it is unlikely that it would be a bother. Because of the indentation, the fingers will sit a bit flat with the keys, and combining that with the very decent key travel of 1.8mm the Logitech MX Keys Mini provides makes for a phenomenal typing experience. In terms of the sound, it is ever so slightly louder than a Magic Keyboard, but noticeably deeper sounding.

The typing experience is generally excellent with the MX mini keyboard. It generates relatively little noise generated and the key travel is just high enough to be comfortable and just low enough that it is ideal for near-silent touch typing for users that prioritize efficiency. The arrow keys are also inverted T shape. This could be subjective as to which shape is better for cramped arrow keys, but for many, the same size for each key (like the ones seen on the MX Keys Mini) is less confusing than keyboards that have a larger right and left arrow keys (like those seen on many MacBooks). 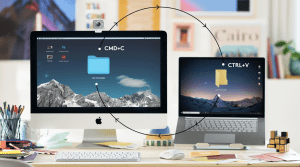 Switching devices with one touch (or less!)

The Logitech MX Keys Mini offers multi-device connectivity for both Mac and Windows devices. It is a common feature among many productivity-focused or portable Logitech keyboards. It allows users to switch between the three paired devices quickly and seamlessly with the press of the button assigned to the device of choice.

On top of that, you also have access to Logitech’s Flow proprietary technology. Using a Flow-enabled mouse, you can switch the connectivity between two computers (connected to the same local network) without even pressing a button and simply by moving the mouse cursor to the edge of one display. Moving your cursor to the other computer also enables your keyboard to work with the same computer without pressing any buttons. This also allows you to copy and paste files between different operating systems through your local network with a one-time initial setup. 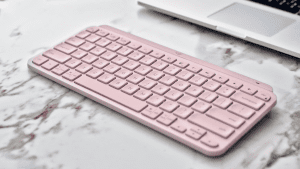 The MX mini keyboard lineup combines top-class functionality with a subtle minimal design and a rigid chassis that distances itself from many of Logitech’s traditionally industrial designs. It features Smart Illumination, USB-C input for charging and a premium feel while typing along with a slew of useful shortcuts. Even more impressive is this keyboard’s ability to switch seamlessly between various devices, making it the best keyboard for Mac mini, PC, and other devices.

If you are interested in any of the models discussed in this article, please make sure to check out our products page. For further information or any inquiries, make sure to directly call us or reach out through our contact us page.