From back pain to shoulder pain, from neck strain to eye fatigue, if not used in a correct posture, computers can create long-term problems for us. One such problem, called Carpal Tunnel Syndrome, can be caused when you put pressure on a major nerve that runs close to where your wrist as you are using a mouse.

Not everyone will develop Carpal Tunnel Syndrome, but for those that have already developed it, or for those that are feeling an unpleasant sensation in their wrist when using a mouse, it might be time for a change in how they hold a mouse.

For a long time, Logitech has been aware of this issue and has provided ergonomic mice designed to alleviate the problem, such as the Logitech MX Vertical and the Logitech MX Ergo Trackball. Now, MX Vertical’s little brother, the Logitech Lift Vertical mouse, has been introduced by Logitech, offering a different look and a more affordable price. 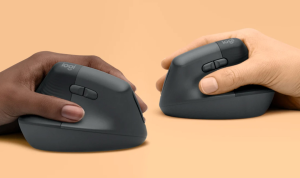 What is the Logitech Lift Vertical mouse?

Logitech Lift Vertical Ergonomic Mouse (Lift for short!) is, as the name suggests, a vertical mouse whose main purpose is to be comfortable. And comfortable it is! Aside from comfort as the main feature, you are dealing with a mouse with the kind of build quality that you can expect from Logitech and many smart features that you also expect from a modern Logitech mouse. The mouse looks simple and you can see a lot of other mice with a couple of extra buttons on the side and another one next to the scroll wheel, but the mention of the few extra buttons does little to describe the many features of this Logitech ergonomic mouse.

The Logitech Lift Vertical wireless mouse is mainly made from a solid matte plastic material. For extra grip, the back of the mouse is made from rubberized plastic with small ridges. The extra side buttons are firm and have a satisfying click while the left and right mouse buttons are silent, despite having a firm clicking feel to them.

The scroll wheel has two matte-chrome sides with rubberized plastic in the middle. It also has “Smart Scroll” written on it, which basically means that it offers two methods of scrolling. One is the same level of fine control over your scrolling that you will find in most mice that have notched scrolling, while the other is a quick, infinite-like scrolling option to go over a lot of lines in a much shorter time. The “infinite” scrolling on the Lift isn’t quite as “infinite” as the likes of MX Master 3 or MX Anywhere 3, but it’s still a smart feature that most mice do not have.

Other things to note about the Logitech Lift Vertical mouse is that there are rubber feet covering the entirety of the base of the mouse for smooth gliding on all surfaces, while the battery cover pops out magnetically to replace the AA battery after about two years. You can also house the USB dongle inside the battery cover. 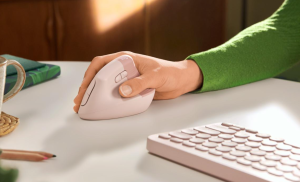 Not only can you connect to up to three devices with the Logitech Lift Vertical mouse, but the connection through the USB dongle is actually revamped to be among the most, if not the most, reliable and quick wireless connections in any mouse.

The Logitech Bolt USB dongle is Logitech’s fastest and most secure connection, replacing their old 2.4Ghz wireless solution. The Bolt dongle is a Bluetooth 5.0 LE (Low Energy). It offers the lowest of the low numbers in terms of latency compared with similar wireless USB dongles and is a more secure connection than the industry standard.

For companies that do not permit the use of Bluetooth devices, the Logi Bolt should not pose a problem as the connection is end-to-end encrypted and the dongles do not connect to any non-Logi Bolt-enabled device.

The Logitech Lift Vertical Ergonomic Mouse is a modern Logitech mouse, and this automatically means that it comes with a variety of features that differentiate it from the pack. Features such as Logitech Flow for immediate switching and file transfer between two computers, Logitech Bolt for next-gen secure, interference-free connection, and per-app profiles to automatically change the functionality of the mouse buttons based on the software you are using now. All these features are offered through the newest version of Logitech’s mature peripheral management software, Logitech Options.

When you first set up the Logitech Lift Vertical mouse in Logitech Options, it scans for programs installed on your computer, downloads the profiles that have been designed for that software, and asks you to enable these profiles. These “profiles” mean that aside from the general functionality of the extra buttons, whenever a supported software’s window is active, the functionality of the mouse buttons changes.

For example, the default profile for the mouse in Photoshop turns the back and forward button into undo and redo shortcuts and changes the middle mouse button to pan. You can change the function of the buttons within any app, even the ones with preset profiles, to whatever you want. This feature alone can turn the most basic mice into much more powerful tools.

This is the feature that inspired Apple’s Universal. It was Logitech that first allowed the seamless transition of the mouse pointer between computers, regardless of whether they operate with Windows or Mac. To utilize flow, all you need to do is set up Logitech Options on your devices and connect them to the same network. Then, you can simply move the mouse pointer to the edge of one screen to move the cursor to another device. That is truly as seamless as it gets when it comes to switching between laptops or computers that you need to simultaneously work with.

This is a very simple feature but incredibly useful. An easy switch allows you to view which devices are paired to which profile on the Logitech Lift Vertical Ergonomic Mouse. This is especially useful when you cannot recall which profile is connected to which device when you use your mouse with more than one laptop or computer.

While there is no mention of the exact DPI of the Logitech Lift Vertical wireless mouse in the software and the speed is only shown in percentages, you can adjust the DPI from 400 to 4000. By default, the two profiles toggle between 1000 and 1600, which are normal speeds, especially for 1080p monitors. But if you happen to have a higher resolution monitor and are looking for DPIs more than 2000, you still have that option. You can toggle between the two preset pointer speeds with the button next to the scroll wheel. 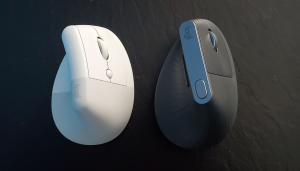 Overall, the Logitech Lift Vertical Ergonomic Mouse is a mouse that puts comfort in a center stage without skipping any of the features that make modern Logitech mice so practical, versatile, and durable.

Nevertheless, it is very possible that the size or some features of this mouse may not be to your liking. If that is the case, consider looking at the Logitech MX Vertical.

As an official Logitech distributor within the Middle East and North African region, Newcom offers a wide range of Logitech peripherals, including various Logitech ergonomic mouse options such as the MX Vertical and Lift Vertical mice.