Logitech’s three latest releases in the UAE: the POP Keys, the MX Keys Mini, and the Desk Mat Studio Series

Recently, Logitech has released a variety of new accessories in some of the markets throughout the world. As Logitech’s distributor in the UAE, Newcom is happy to announce that these products will soon be widely available throughout Dubai and other Emirates. As a result, we have prepared this article to introduce you to these new products and offer an overview of their best features. 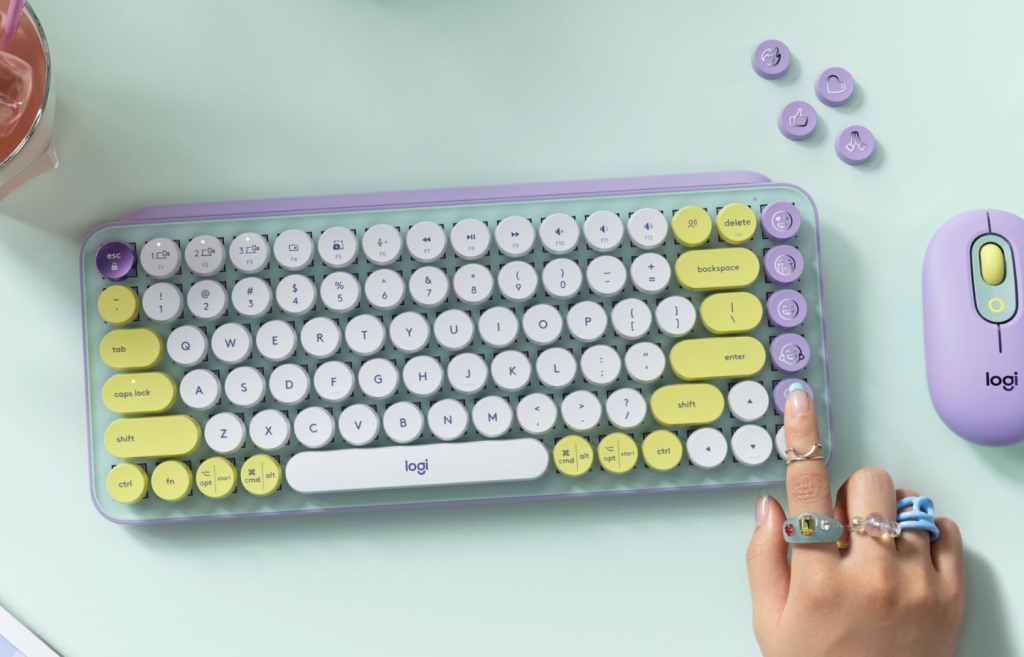 The Logitech POP Keys wireless keyboard is unique, especially in comparison to other Logitech keyboards, mainly because it appears in bold color schemes and rounded, elevated keys that reminisce a typewriter. The three-color palettes that the Logitech POP Keys keyboard (as well as the POP Mouse) comes in are vastly different from one another. The striking colors are sure to attract those who can appreciate their uniqueness. After all, there aren’t many keyboards that come in bright colors.

Aside from eye-catching colors and mechanical keys, there is another striking feature on the Logitech POP Keys keyboard, making it especially attractive to younger audiences. It is the inclusion of dedicated emoji keys! The keyboard has a total of five emoji keys. One of the keys opens the emoji list available on your device, while the other four feature some of the most used emojis ready to be used by the push of a button.

The four emoji keys can even be swapped with other extra emoji keys (which come in the box). The emoji shortcuts are a feature that is sure to attract people who frequently use emojis in their texts, especially those who use iMessage, Telegram, WhatsApp, or other instant messaging software on their computers. The addition of the shortcuts has even led some to call the POP Keys the Logitech emoji keyboard!

Moving past the design elements, the Logitech POP Keys keyboard is a quality, compact mechanical keyboard with great build quality and tactile Brown switches with long key travel. It does not feature retractable feet but stands at a slight angle out of the box for more comfortable typing. It also features Logitech’s Unifying dongle, which allows you to connect other Logitech accessories to your device with that single dongle to save up space (this will happen as long as your other devices also support the Logitech Unifying technology). This keyboard also falls within a group of Logitech multi-device keyboards as it features a seamless connection between three Bluetooth devices with the three toggle keys in the F-row keys. 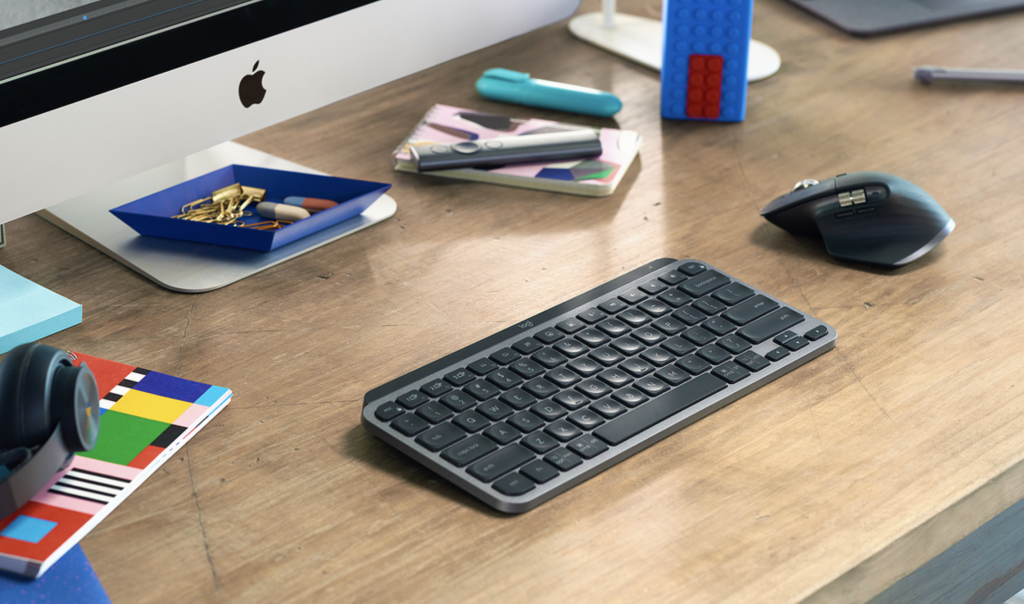 The Master series mice and keyboards quickly became a gold standard for both mice and keyboards. The MX Master series of mice came first, offering a premium feel that people usually associated with gaming mice to a productivity-focused product. It became an instant hit within the tech community. Later, that success was replicated by the MX Keys. Logitech managed to make a keyboard that resembled the feeling of high-quality laptop keyboards and added extra, but not overwhelming, functionality to it in a well-built, durable, and premium package that was very hard to find any flaws with. Simply put, it became a standard-setter in the productivity-focused keyboard market.

But some people don’t like full-sized keyboards or don’t have the space for them on their desks! Logitech has finally shrunk the excellent build, design, and functionality of the MX Keys and fits it in a compact form that is now known as the MX Keys Mini. The MX Keys Mini keyboard features the MX Key’s excellent scissor-switch keys with 1.8mm key travel, as well as the concave-shaped keys that make your fingers rest easily on the keys.

The keyboard comes in four different colors: pale gray, graphite, black, and rose. It has an aluminum chassis with a rigid build that just does not flex. It also comes in three slightly different versions: the Logitech MX Keys Mini for Mac, the MX Keys Mini for business, and the standard MX Keys Mini.

Logitech MX Keys Mini for Mac comes in pale gray only and a slight change in key layout to match the typical Apple keyboard layout. The MX Keys Mini for business comes in pale gray and graphite, alongside a Logitech Bolt, enabled dongle that allows for extra IT department functionality and end-to-end encryption. The standard comes in all four colors and has the standard Windows keyboard layout (but it features Mac key indicators too). 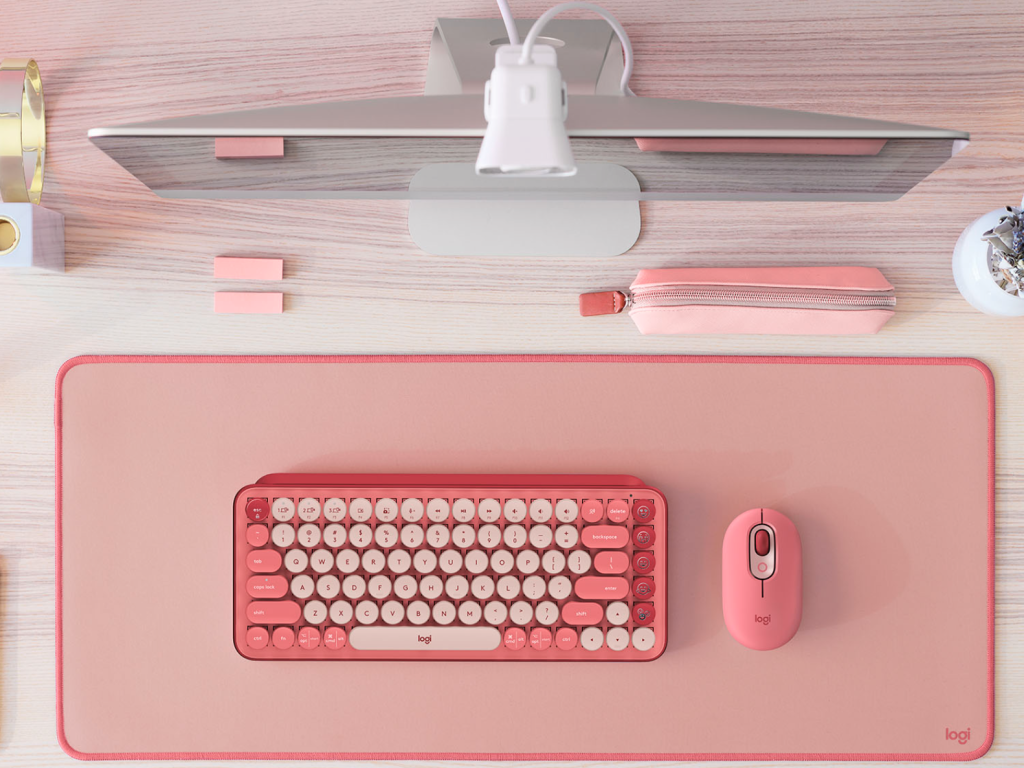 Logitech has been going through a bit of a shift in the brand image with some of their latest lineups. They are putting extra focus on productivity-focused peripherals that are more premium-looking, elegant, and subtle. It is a welcome change, especially given that many of us have merged our offices and homes since the start of the Covid-19 pandemic.

One of the latest in this productivity-focused lineup is the Desk Mat Studio. The Logitech Desk Mat is rather large (30 x 70 cm) and goes well with Logitech’s new lineup of keyboards and mice and comes in color schemes that match many new and older releases, most particularly the MX series mice and keyboards. It comes in three colors: dark rose, lavender, and mid-gray, the latter being a more subtle tone for your black/white/grey keyboards.

Two of the most important features of this desk mat are its rubber back and its top layer material. The rubber helps keep this desk mat for the keyboard and mouse not only due to its anti-slip nature but also because of the heaviness it adds to the mat. The top layer is made from 100% recycled polyester that ensures a smooth glide for your mouse and acts as a spill-proof surface, protecting your desk from any accidents involving spilled liquids.

Logitech is always trying to push the limits of computer peripherals, to make them seem more than just peripherals. With the POP Keys, it’s about a keyboard that is more than just a high-performance keyboard; it is also a fashion statement of sorts. With the MX Keys mini, it’s a premium, elegant-looking but durable compact keyboard with plenty of extra functionality (e.g., Logitech Flow, Bolt, and multi-device connectivity). The Desk Mat Studio, it’s a traditionally gaming-focused product, brought into the productivity/minimalist space. 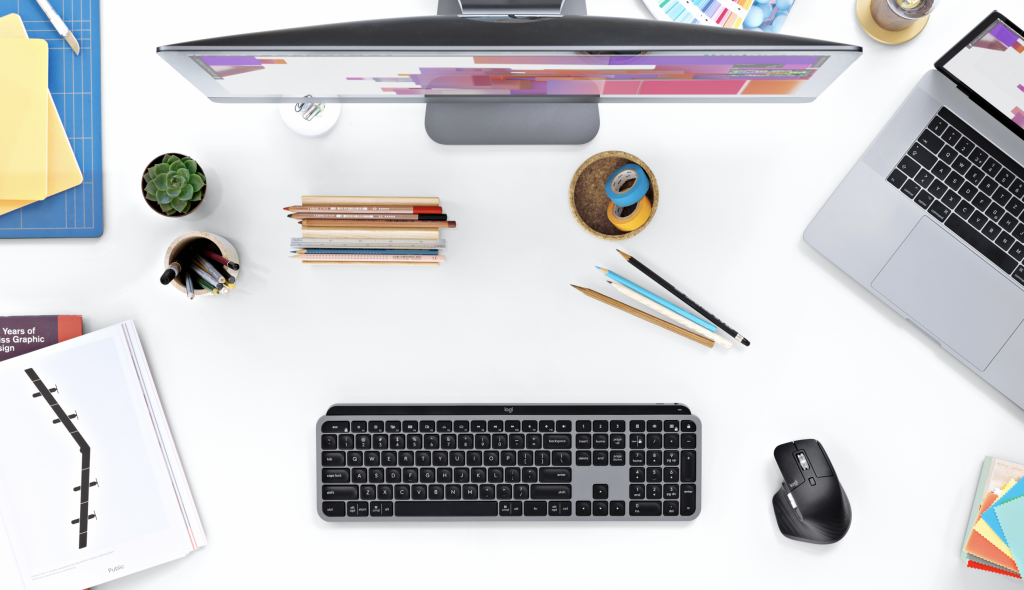 As an official Logitech distributor within the Middle East and North African region, Newcom offers a wide range of Logitech peripherals, including the newly released Logitech POP Keys Keyboard,