Looking for a wireless charger? Here are 3 top-notch Logitech options

If there was ever any doubt in anyone’s mind that wireless charging isn’t a passing fad in the tech world, Apple’s addition of the MagSafe to the iPhone lineup should clear up all of that. Rumors have been circling around that the infamous lightning port may be on its last leg and that the next iPhone (or maybe the one after that) will come with no ports! That, of course, leaves people with wireless charging as the only way to charge their phones. 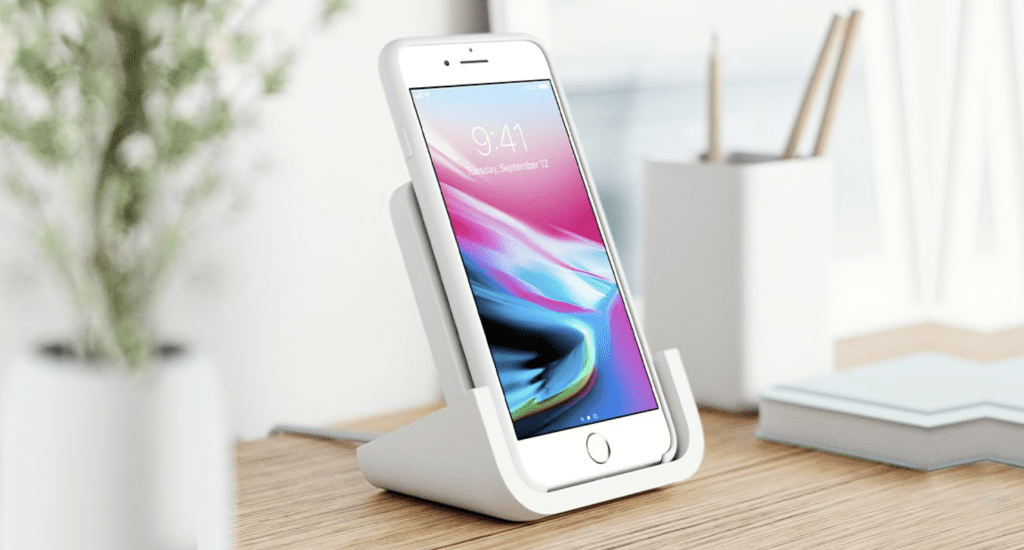 Wireless charging is becoming a more prevalent feature in the smartphone world and is being adopted in phones in a much broader price range than before. While it was Samsung’s 2015 flagship Galaxy S6 that first commercialized the use of Qi wireless charging, the standard slowly seeped into upper-mid-range phones, and now you can find it in a lot of mid-range phones. 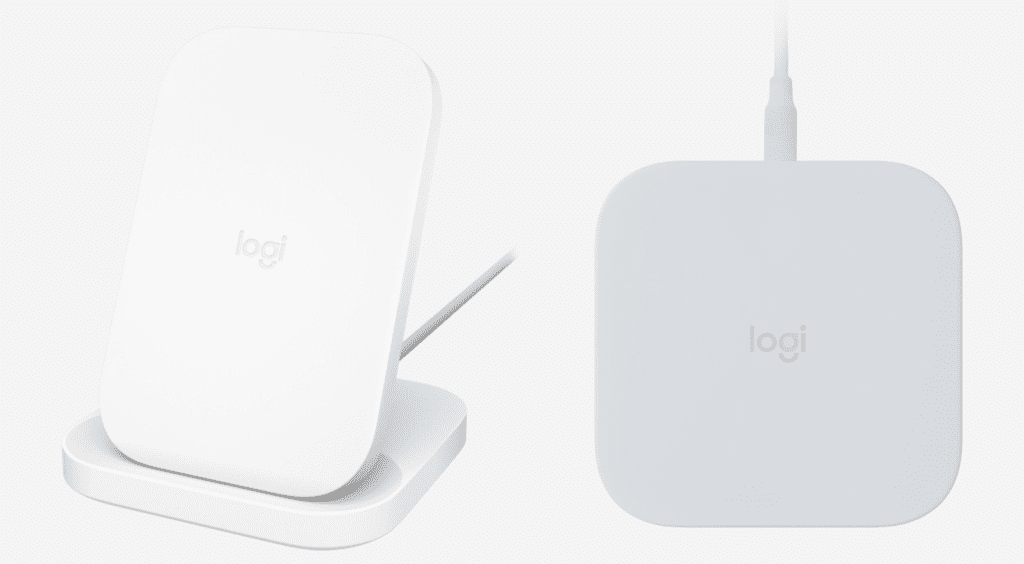 These are the two most popular Logitech wireless chargers, and for good reasons! The Logitech Powered Pad focuses on keeping the price down but delivers the same quality build that you can expect from Logitech. However, the Logitech Powered Stand wireless charger goes one step further and offers the convenience of not having to adjust the phone on the stand to align the coils in the wireless charger with the ones in the phone. Both products offer the same excellent build quality, light indicator and charging speed, and compatibility.

The 7.5-watt wireless charging takes about as long as it takes to top off the iPhone with the 5-watt charger that comes in the box (oh, my bad––the charger that used to come in the box! Now, its are recycled and somewhere protecting the environment in some other shape or form). It’s important to note that for select Android phones, the charging speed goes up to 9 watts, but it takes it down a notch to 5 watts for AirPods.

Also, for those of you who are sensitive to light when sleeping, we’ve got good news: the light indicator on both products, which shows whether the device is charging or fully charged, is dark enough to not be annoying in a dark room when you’re trying to sleep, but also bright enough that it is discernible in a well-lit room. 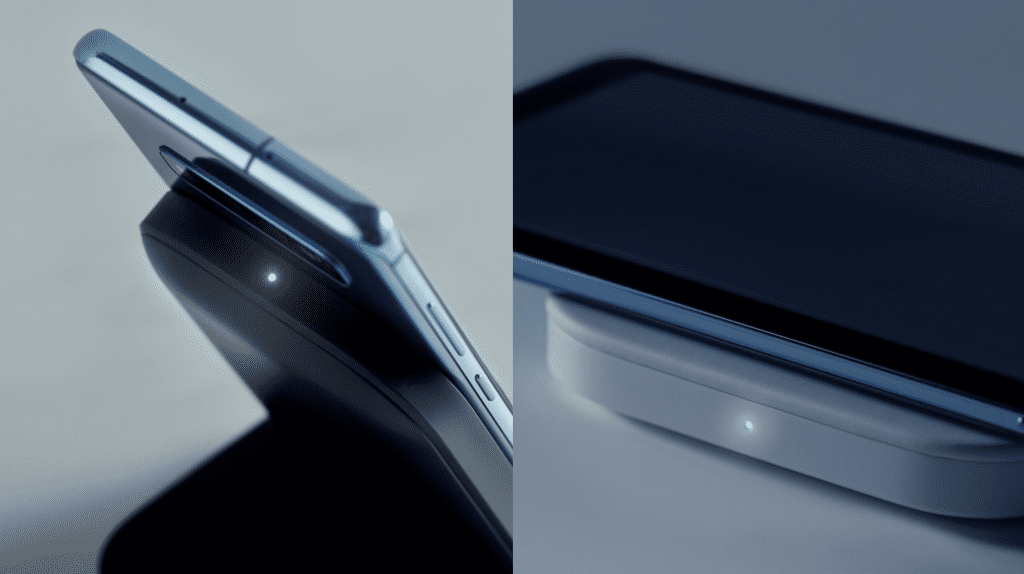 It’s worth mentioning that there is an older version of the Powered Stand, known as Powered for iPhone. This model came out when Apple announced their first line-up of wirelessly rechargeable phones back in 2017 with the iPhones 8, 8 Plus, and X. Now, there are a few differences between the two models; for instance, the Powered Stand provides support for charging AirPods, whereas Powered for iPhone does not.

It might be more difficult to find that model now depending on where you live, but there are a couple of things that you need to know if you want to go with the Powered for iPhone instead of the newer Powered Stand: (1) the Powered for iPhone does not charge your AirPods, and nevertheless (2) it comes with a more convenient and useful U-shaped cradle that makes it a bit easier to put the phone on the charger without fearing it will drop from the sides. 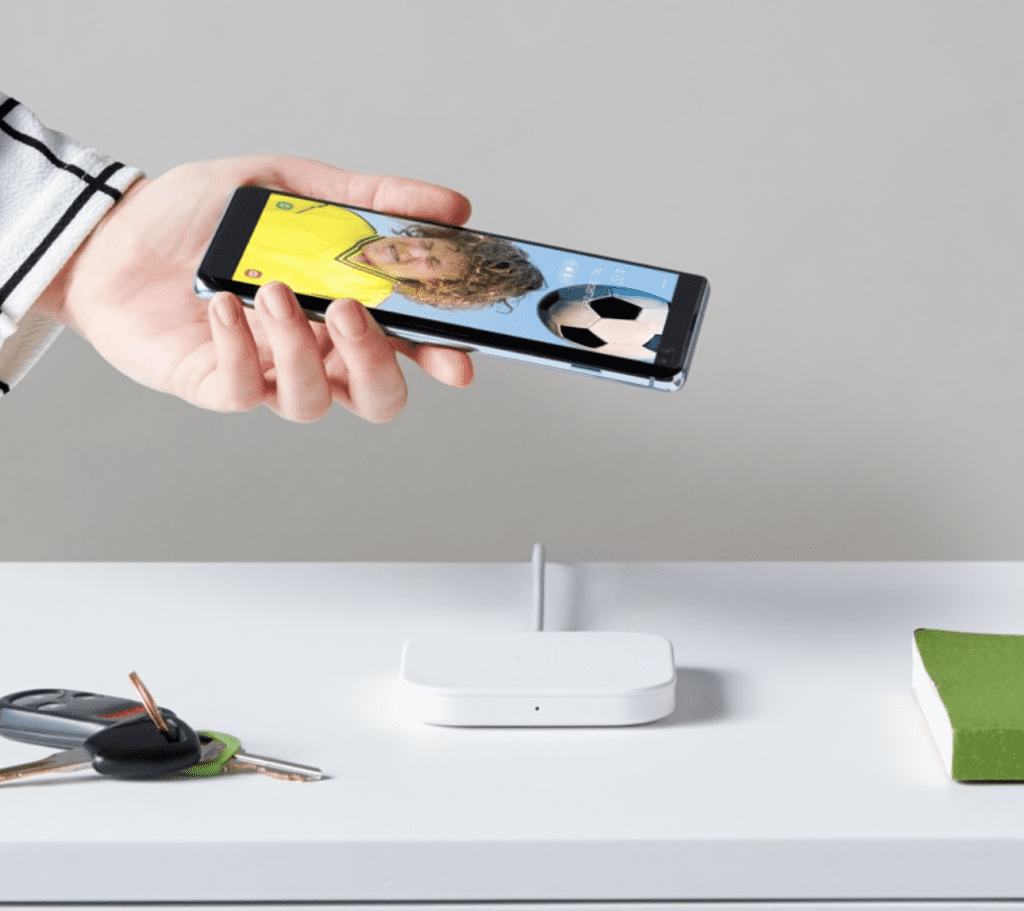 You can also use the cradle to charge the phone in landscape mode, which makes for a good setup if you’re watching videos on your phone and don’t want it to be in portrait mode while charging.

But one aspect of these products that we cannot overstate––especially when it comes to a product as simple in function as a wireless charger––is their design and the material used. The power brick of the Powered Stand and Logitech Powered Pad form a uniform design that looks as simple as it does elegant.

The other thing that we can’t overstate is the unboxing experience! You will have to see an unboxing of the products to know what I mean! The Powered Pad and Powered Stand come in matte black and white, while the Powered for iPhone only comes in white and is currently out of stock. 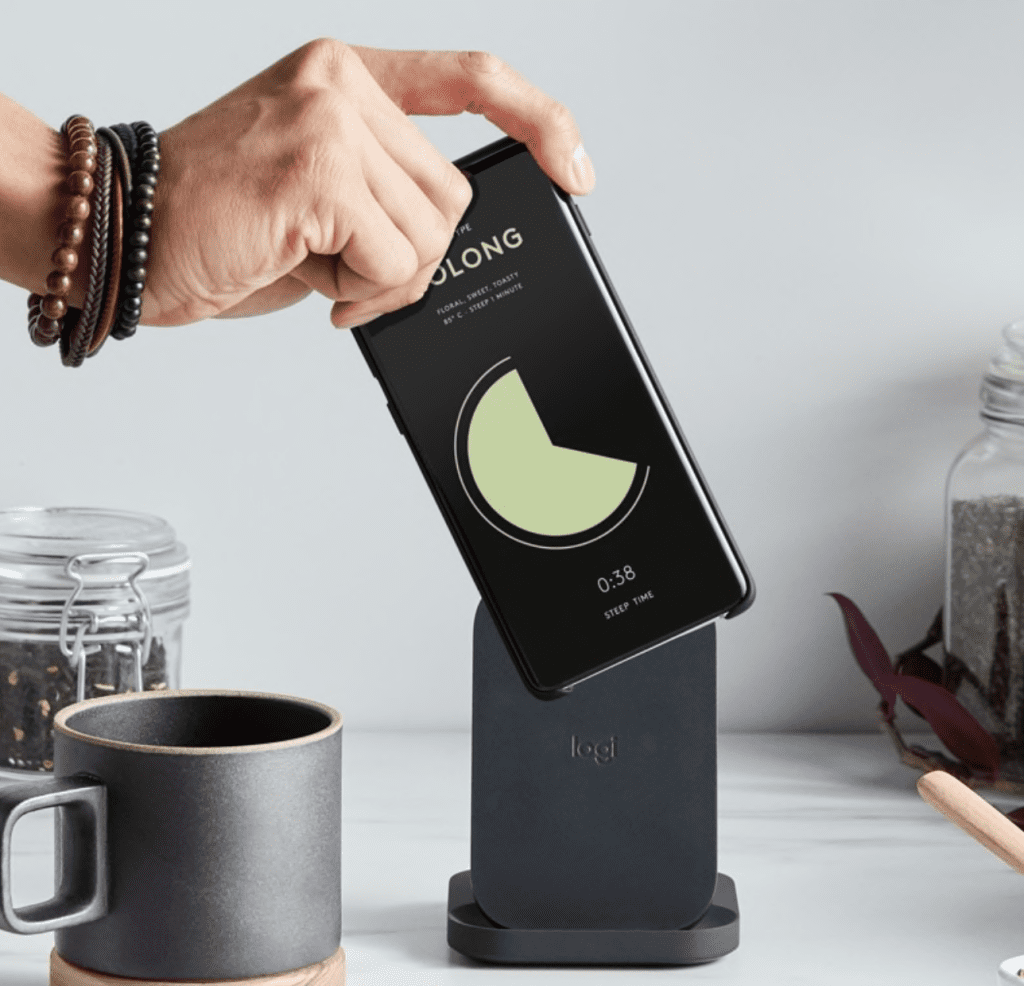 The unboxing experience, as well as the quality of the material and the design, are the reasons why these simple wireless chargers are priced a bit higher than some of the other options on the market. The Powered Stand and Powered Pad are not just chargers––that is, they are not designed only to fulfill a function but to also serve style; thus, they are as much a tool as they are an ornament.

And that last sentence could not be truer for Logitech’s top-of-the line and most niche wireless charging combo: 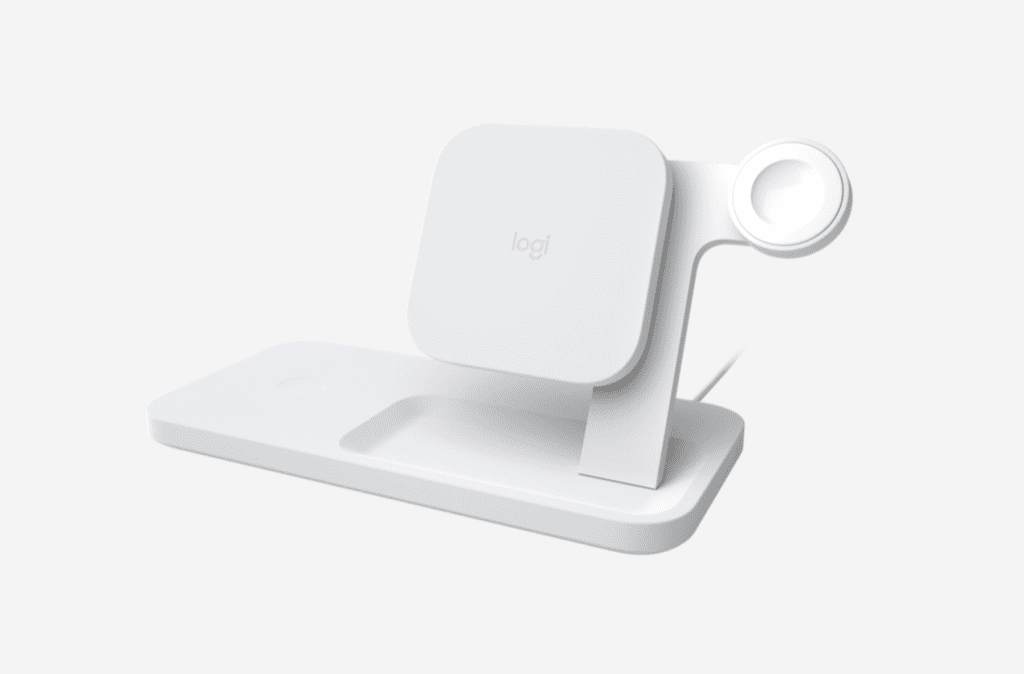 This is what the forgotten AirPower was promising before it got ditched by Apple after it was announced during Apple Keynote 2017. A one-stop-shop shop for all your non-Mac charging needs. Airpower was supposed to be for people who had an iPhone, an Apple Watch, and a pair of Air Pods. You could charge all three of them on this one neatly designed charging mat. But due to many manufacturing issues, AirPower never saw the light of day.

But fear not! The spirit of AirPower lives in Logitech’s Powered 3-in-1 Wireless Charger since it is designed for the exact same group of people that the AirPower was supposed to serve. Designed with the same attention to detail, same quality, ease-of-use, and aesthetics as the Powered Pad and Powered Stand.

The intrigue of AirPower was that it meant to represent the same seamless connectivity that the Apple Watch, iPhone, and AirPods do, in the form of a charging mat. Apple’s vision was that by seeing all these devices lined up next to each other, the user would be reminded, “yeah, this is as seamless of an experience as you can get.” Unfortunately, that vision never fully came to fruition.

Well, thankfully, you can still line up all your Apple devices and take a step back to watch the “seamlessness” in all its glory. At this point, you are either so enmeshed into the Apple lifestyle that you know exactly what I’m talking about and have already obsessed over it in your head time and time again, or you think I’m just a fanboy living in a fantasy!

If you think like the latter group, then you might want to look into Logitech’s Powered 3-in-1 Wireless Charger, which features three connected wireless charging pads that are available for you to use with your Apple devices. But if you are in the former group and know what I mean when I say “seamlessness,” being introduced to this Logitech charger probably gave you the same feeling you got when you first opened the lid of your AirPods and saw the case magically pop up on your iPhone. 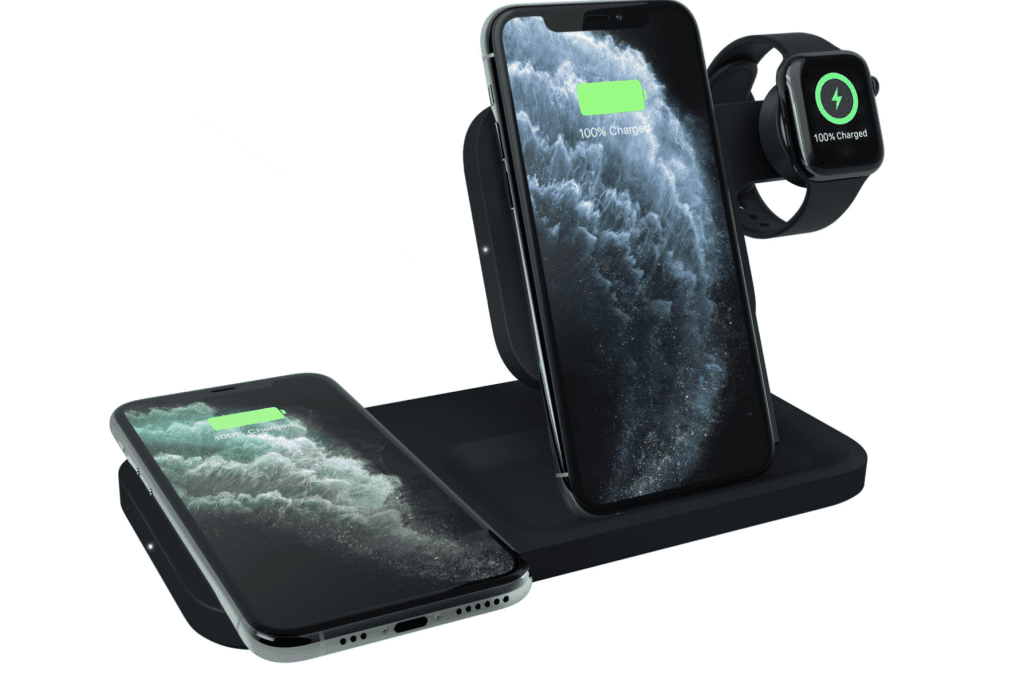 The experience with the Powered 3-in-1 wireless charger is essentially one and the same as the AirPower. But while it is still cheaper than the AirPower that never was, you are still paying a premium for the experience and for being in the rather small group of people who can actually use this device to its full potential. If you are thirsty for even more seamlessness between your Apple products, you can’t go wrong with the Logitech Powered 3-in-1 wireless charger.

As an official Logitech distributor in many Middle Eastern countries and the Arica region, Newcom offers the above-mentioned Logitech wireless chargers. If you are interested in any of the models discussed in this article, please make sure to check out our products page for a few suggestions. For further information or any inquiries, make sure to directly call us or reach out through our contact us page.