Samsung’s Odyssey G9 already set the bar for gaming monitors when it came out in August of last year. It was armed to the teeth with a feature-set that was/is impossible to find in any other monitor. It was an overkill monitor with a price tag to match. But apparently, Samsung felt that it could push the boundaries even further, so they decided to release the successor to the G9: the Odyssey Neo G9.

It is difficult to top what was already by far the most complete monitor to ever be released. The G9 was already equipped with Samsung’s QLED technology with deep blacks and vivid colors. It already boasted a 49” canvas with an intense curve of 1000R (as curved as displays can get). It already had a 5120×1440 resolution with a ridiculously high brightness of 1000 nits and an even more ridiculous refresh rate of 240hz! And more features that we’ll go through over the course of this article. 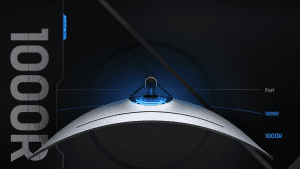 Suffice it to say, the features found on the original G9, were already groundbreaking. They were also way too many to be included here, so if you want to get a comprehensive look at them, we suggest you read our original Samsung Odyssey G9 review before proceeding.

With that said, let’s see how the Neo G9 aims to improve upon the G9’s incredibly solid ground.

Overall, the changes made in the Neo G9 are rather subtle and require a bit of attention. By far the biggest change, however, is the use of mini LED backlighting. This gives the Neo G9 many more local dimming zones; from 10 to 2048! The 10 local dimming zones in the original G9 meant that moving a bright object (such as a mouse cursor) over a dark background would result in some rather noticeable halo around the object, especially if you were looking at it from an angle. With the increased number of local dimming zones, the halo effect hasn’t been completely removed, but it is now limited to edge cases, such as moving a white mouse cursor over a completely black background, as opposed to having it be noticeable in content. 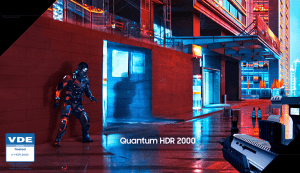 Staying on the changes made to the display, the peak brightness of the Neo G9 has doubled from 1000 nits to 2000! This allows the Neo G9 to become HDR 2000 certified, unprecedented in consumer-grade displays. The standard ensures the highest levels of detail in shadows and highlights, especially thanks to the mini-LED technology. The mini-LEDs mean that the panel on the Neo G9 is not edge-lit, meaning that the backlight is going to be a lot more consistent throughout the massive real estate of this monitor.

There are also some changes in the Infinity Core lighting at the back of the monitor. On top of the lighting being fully customizable, it can even react to what is being displayed whether it’s the game you’re playing or the movie you’re watching. The closer it is to a wall behind it, the more dramatic the RGB effect will look.

You now also have access to upgraded HDMI 2.1 ports up from HDMI 2.0. What is the difference? Well, now you would be able to use the HDMI port to stream 4K 120 fps as opposed to 60 which was previously possible with the HDMI 2.0 standard. This is especially handy for console gaming as consoles don’t have DP (Display Port) outs and only offer HDMI. But if you want to get the full 120 fps from 9th gen consoles, you need the latest HDMI standard (being 2.1) which is three times faster than the previous 2.0 standard. DP is still the preferred connection for computers though as it is the only port that allows for the full 240 fps capability of the Neo G9 to be realized.

There is also a picture-in-picture and picture-by-picture to give users the kind of flexibility of use that can only be achieved with a monitor of this caliber. 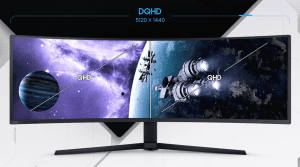 Sure, the 4K monitor would look great on idle and for text, but let’s not forget that this is still mainly a gaming monitor and its main purpose is to make games look good. Games would look good on a 4K if we’re not being realistic with our expectations of what today’s GPUs are capable of! That is to say, while top-of-the-line GPUs are capable of doing 4K gaming at a reasonable framerate, they can’t realistically do the same thing twice; meaning they can’t drive two 4K monitors running the latest games at max settings with a reasonable framerate. This is why Samsung opted out of 4K for their best-in-class monitor, because pushing over 16 million frames on the latest games is just not realistically possible, even with the strongest GPUs available today.

Now, you might be thinking to yourself, “they could have still gone with 4K and just let us choose whether or not we can drive the game at 4K or 2K.” The problem with that is that the optimal way to use a monitor is to use it at its native resolution. This means that if you have a 4K monitor but are using it to play games at a 2K resolution for better performance, your game would look slightly worse than if you just had a 2K monitor playing the game at its native resolution. So, Samsung made a judgment call and decided to go with 2K to strike a balance between looks and performance. 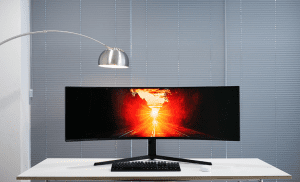 With the launch of the Neo G9, you will be able to find the original G9 at a discounted price. The G9 was and still is an incredibly capable monitor that still beats nearly every other monitor in almost every category. But the Neo G9 is now the sole contender for delivering the absolute craziest specs and performance with no holds barred. If that’s what you are looking for, and you have a hole of thousands of $ burning in your pocket, and you already have an incredibly powerful PC, the Neo G9 just cannot be beaten.