Since Apple came out with the Pro Display XDR, manufacturers began paying more attention to the build quality and the look of their monitors. Samsung was one of those manufacturers that took note of this recent, consumer-friendly trend. With the release of the new Apple Studio Display, Samsung released a product that was, at least in a sense, a direct response to the Studio Display. The product was the M8 smart monitor.

The fact is that the M8 Samsung Smart Monitor is a lot more than just a display. It is a monitor, a smart TV, a remote display, an IoT hub, a standalone productivity machine, and an entertainment hub, among other things! It truly is difficult to pinpoint how great the M8 is, and any naming scheme that isn’t at least a line long doesn’t really do it justice. So, the best we can do is go over the functions one by one.

As you read this article, the primary idea about the M8 you need to keep in mind is that this is the most flexible and best smart monitor we’ve ever seen. Nothing else comes even close. 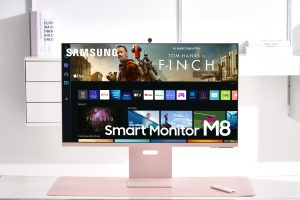 The Samsung M8 monitor is sized like a small TV rather than an average monitor. At 32″, it is on the larger side of the size spectrum when it comes to monitors and on the smaller side of the spectrum when you consider TVs. The M8 is accompanied with 4K resolution to ensure that the bigger size doesn’t sacrifice quality.

Being a modern Samsung display, the M8 supports HDR10+ content to give a very decent dynamic range. It also has a contrast ratio of 3000:1, which is not quite at the OLED levels of contrast but is still on the higher end of non-OLED displays. It also covers 99% of the sRGB color gamut. The brightness of the panel can reach up to 400 nits.

The display sits at a refresh rate of 60hz with 4ms of response time, making it a suitable choice for content consumption but not the most appropriate for gamers. However, there is a gaming mode on the M8 Samsung Smart Monitor, which offers some control on the input lag and an artificial response time enhancer. One cool gaming feature, though, is that the monitor can make the host gaming console detect the M8 as an ultrawide monitor to give you a wider field of view.

The display also features adaptive brightness to avoid hurting your eye. It does so by lowering the brightness level as your room gets darker. While you can technically adjust your brightness level whenever you want on any monitor, most people rather not mess around with the monitor settings (OSD), which is why the adaptive brightness feature is so convenient. The Samsung M8 monitor also features an eye saver mode which is just another name for a blue light filter for extremely dark environments to hurt your eyes less. In brighter environments, however, the matte coating helps a lot with reflections. 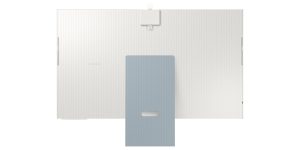 The first thing you’ll notice when you take the M8 out of the box is how thin and light it is, especially considering its massive 32” size. The next thing you will notice when you flip the display is the herringbone pattern that gives this Samsung smart monitor a unique texture and look, especially combined with the pastel green, blue and pink colors it comes in, along with the white.

When it’s time to attach the display to the stand, you only need one Philips-head screwdriver to attach the base to the stand with a single screw. Attaching the stand to the display itself is only a matter of aligning it with the slot and pushing it into place with a satisfying click––no screws necessary. The stand allows for two degrees of freedom. It is height adjustable and allows for some upwards and downward tilt, but no swivel.

Around the display, you will also find the 2.2 channel speaker holes that are supported by a tweeter built into the display. It gets reasonably loud and can automatically adjust the sound by analyzing the environment, but the bass is lacking. Given the slim profile of the display, the lack of bass is an understandable trade-off. 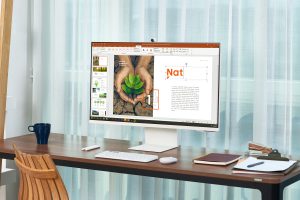 In the box, you will find a USB-C cable and a strange micro-HDMI to HDMI cable. The decision to go with micro-HDMI instead of regular HDMI was so that the display could be as thin as it is. The USB-C cable allows for video transfer as well as power passthrough of up to 65W, removing the need to charge the laptop with a separate cable while the video is being sent to the monitor.

The 65W power passthrough is most likely the reason for how bulky the included power brick is for this monitor. It could also have something to do with the fact that this Samsung smart monitor also has a processor inside to deliver standalone browsing and Microsoft Office support, as well as the Smart TV software (TizenOS). There is also a hole on the stand to allow you to hide the cables behind it.

The most notable wireless connectivity option is the inclusion of AirPlay, which gives you a wide range of connectivity options with Apple devices. AirPlay has become much more attractive for iPad users now that iPadOS 16 is finally bringing decent screen mirroring with the correct aspect ratio and no black bars on the sides. You can also use the M8 to extend the display on your Macbook instantly and without any cables. The Samsung M8 is one of the only third-party monitors that offer an AirPlay connection to Apple users.

If you want to go beyond just sharing the screen and you have a supported Galaxy phone, you can use Samsung DeX to take screen mirroring to a completely different level. You almost turn your phone into the brain of a full-on desktop computer with an external display. DeX turns your phone UI into a Windows-like interface, with windows and multitasking functionality and even separate windows of the same app. You can use your phone as a trackpad in the meantime or connect an external mouse and keyboard to the display using Bluetooth. 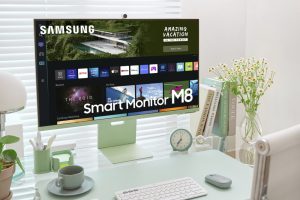 The Samsung M8 monitor comes with its own TizenOS pre-installed (as is the case with Samsung Smart TVs), which means it can like a basic computer without any computer/phone being attached to it. You can browse the web and do some basic Microsoft Office tasks on the monitor simply by connecting a mouse and keyboard to it as the monitor comes pre-installed with Microsoft 365 suite.

Another smart functionality is the inclusion of Bixby and Alexa, which can make the M8 function as an IoT smart hub for your smart home accessories. The inclusion of these two assistants brings with it a lot of other functionalities, such as playing music, setting up a timer, and searching the web. You can use the remote or the microphones on the monitor to give commands to your voice assistant of choice and to manipulate various smart home peripherals using the monitor.

Using the smart remote that comes with the M8 Samsung Smart Monitor, you can also navigate through various apps to watch your favorite shows on popular streaming services. Built-in apps include Netflix, Youtube, Disney+, Prime Video, and even Apple TV+. 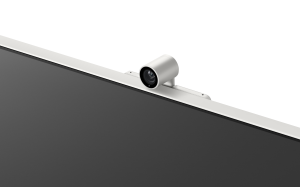 In a unique move, Samsung decided to not include the webcam in the chassis of the M8, but rather put the SlimFit camera in the box as an add-on. This allows users to use the webcam only when they want to, meaning you can pop off the camera with no effort as the connection between the camera and the display is magnetic. Furthermore, because the lens on the SlimFit is not constrained by the very thin chassis of the display, it is rather large and has a good amount of depth to it. This results in overall better quality than even the webcam you will find on the Apple Studio Display or the new iMacs.

Another feature you won’t find in other monitors with included webcams is that you can tilt and swivel the webcam to your liking, and with the webcam’s own smart framing, you’ll always get the angle you want as opposed to being constrained by the angle of the display.

When you are done using the webcam, you can either put on the magnetic cap to block its view or just take it off entirely with a gentle pull. 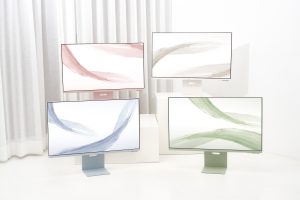 The feature list of the Samsung M8 Monitor is so ridiculously long that with all the items we mentioned above, we still couldn’t fit everything in! But all you need to know about it is that this is primarily an entertainment and productivity-focused monitor that delivers excellent image quality with ultra-sharp, clear text, vivid colors with great contrast on a very large canvas with higher than average brightness. That alone (with the addition of the SlimFit camera) warrants a recommendation for the M8 even if you don’t care about the slew of smart features and the ability for the M8 to be used as a standalone entertainment (or even productivity) hub.

The M8 is the most versatile display on the market today, stealing the crown from its predecessor, the M7, and also a Samsung smart monitor. If your workspace and bed are in the same room, you have the potential to use the M8 to its maximum potential by using it as a monitor in your work hours and lying back on the bed, and streaming your favorite content with the remote a few meters away when you want to relax.

The Samsung M8 Monitor follows in the footsteps of the monitor lineup that almost created an entire category for itself, the smart M-lineup by Samsung. The way things are going, Samsung is the sole contender in the category of versatile, smart monitors, competing only with themselves. For that reason, we can rather easily say the M8 Smart monitor is the best smart monitor on the market. Samsung has been able to improve upon the original idea of the smart monitor since its advent, and we are excited to see just how the next model in the lineup can improve upon the already feature-packed M8.

As an official Samsung monitor distributor within the United Arab Emirates, Newcom offers a wide range of Samsung smart monitors, including the Samsung M7 and M8 monitors mentioned in this article.

To make sure you are the first to find out about the latest Samsung releases in the region, such as the new Samsung Ark, be sure to frequently check out our blog posts.