53.6 billion kilograms; that is how much e-waste humans produced in one year, according to a report by the United Nations in 2019. That number is expected to double in the next 15 years. When you put that number next to the 2 billion tons (2,000 billion kilograms) of trash that is produced annually, the number doesn’t seem that concerning.

But once you think about the slew of harmful compounds you will find in e-waste––such as cadmium, mercury, lead among many others––and how they negatively affect air, water, soil and us, the effects of e-waste should sound much more alarming.; especially when you consider that with the current methods of e-waste management, e-waste recycling only concerns 12.5% of the total amount of e-waste.

If you need more convincing on the effects of e-waste on the planet and the growing need for electronic waste management, keep reading. 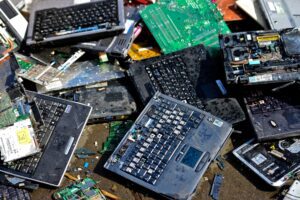 Why e-waste is a serious danger

E-waste is outright toxic for the environment. The fact that it is not bio-degradable means that it will keep piling on without any sign of it going away naturally. To further add to the harm they cause the environment, the process of recovering valuable metals from e-waste, such as gold, is doubly harmful. Open-air burning along with acid baths used in these processes release toxic fumes in the air, not to mention their immediate harmful effects on the workers who carry them out. When it comes to e-waste recycling, improper e-waste disposal and handling also results in a significant loss of some of the valuable metals that we might run out of in the foreseeable future.

The only sure-fire way to cut down on the negative effects of e-waste and contribute to e-waste management is to produce less of it; meaning an anti-consumerism culture needs to be on the agenda. Changing the fundamental driving force of capitalism, however, is a daunting task. This can only be achieved through awareness-raising campaigns that, thankfully, have been effective to a decent extent as they gather steam, but almost exclusively in countries with higher living standards.

There is, however, some light at the end of the tunnel. What is possible and being done right now is that established electronics companies take the initiative to use recycled material in the production of their products. Not all companies can/will take this initiative though.

New companies, especially in the field of electronics, must start with razor-thin margins and competitive pricing to stand a chance in the market and stay in business, which means they often can’t afford to go through the cost of using recycled material, as that would drive up the end-user’s price, making them less competitive. So, the burden of taking that environmental initiative falls on the backs of more established companies. Two of these companies, which have been doing their fair share in terms of using recycled material in the technology sphere and contributing to electronic waste management are Logitech and Targus. 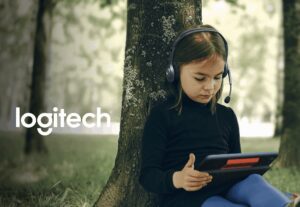 Arguably the biggest name in the sphere of computer peripherals, Logitech is also at the forefront of that sphere’s environmentally conscious efforts and is doing its part in e-waste management. Logitech’s transparency towards their carbon footprint and how its actions have reduced it serves as an example on how to take environmental initiatives the right way. The efforts have been so numerous that categorizing them seems necessary.

You will find a section on Logitech’s website under this very title. In that page, you will find out that Logitech’s climate positive approach has resulted in a 94% reduction in Scope 1 & Scope 2 carbon intensity* since 2015. They also currently use 92% renewable electricity in their production facilities and produce carbon-neutral products. The approach is also reflected in not just the manufacturing procedures but also in their product designs, with 25% of their new models reflecting their climate positive approach.

*Scope 1 carbon intensity covers direct carbon emissions from the corporation’s own facilities and resources, whereas Scope 2 covers more indirect emissions such as Carbon released as a result of purchased electricity, heating and cooling and other energy consumption-related emissions 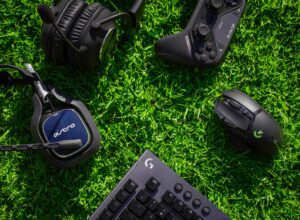 Logitech products are built to last. Logitech and its users know this, but Logitech still monitors the lifecycle of their different models through the software that the users use in tandem with their products and the data collected through the software (with the users’ consent) is used to gauge which model has an acceptable lifecycle before the software stops sending usage reports to the servers, indicating that the product is most likely discarded. This is done through Logitech’s transition to a standardized web based LCA data platform to monitor the life cycle of products.

At the core of it all though, simply by designing a durable product, Logitech is helping the environment. The more durable a product is, the less likely its users are to buy more of the same during its effective life cycle and create e-waste.

Here are some numbers concerning verifiable actions that Logitech has taken to use recycled materials in its lineup: 35,178 tons of electrical devices, 3,238 tons of batteries and 19,616 tons of packaging have been recycled into Logitech’s brand-new products. For its efforts, Logitech has also been given many rewards that reflect their commitment to the environment. 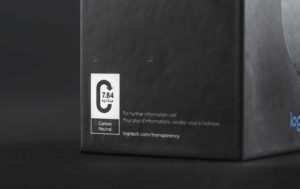 You will find this label on select Logitech gaming products, which indicates the carbon footprint of the product all the way back from sourcing of raw materials throughout the manufacturing process until it reaches out to the retailers. This will also help indicate whether the products are considered carbon neutral. Logitech has committed to having this label on all its major product lines by 2025.

As mentioned before, awareness-raising is crucial in our way forward for mitigating the e-crisis. The transparency label that is being added to more Logitech products puts a responsibility on Logitech to label their products in a way they would be able to advertise and not be ashamed of! Hopefully, their entire lineup will soon bear the “carbon neutral” label on them.

Logitech believes that at the current state of the e-waste crisis, individual action, while crucial, just isn’t enough and collective actions need to be made for proper e-waste management. A commendable stride that Logitech has made towards that mission is announcing its commitment to become fully carbon neutral as a company until 2030.  Logitech is hoping to achieve this feat by transitioning to renewable energy, restoring forests, and supporting climate-impacted communities. They are also, trying to do more by setting their goal to have a net positive impact on the climate and remove more carbon from the atmosphere than they emit by 2030.

On top of all their own efforts, Logitech is also relying on you, the end user, to do your part in e-waste managing and e-waste disposal by asking you to recycle your unwanted or broken product and helps you in doing that by pointing you to global e-waste recycling centers.

Look for the Carbon Transparency label on your next Logitech purchase to be at peace knowing that your (potential!) consumerism is not negatively impacting the planet. Do recycle your purchase once it breaks or when you want to discard it.

Targus, another company doing their fair share in the field of technology, has taken an initiative in using recycled material in their production chain. Targus’ EcoSmart laptop bags and backpacks are designed to minimize its users’ carbon footprint while still offering the same functionality, quality, and durability that the rest of Targus bags are known for.

When browsing the EcoSmart collection on Targus’ website, right alongside the key features of the backpack/bag you will see the number of plastic bottles that were recycled in the making of that model. It is not exactly e-waste recycling, but it is still recycling nonetheless, with similar positive effects and intentions.

The process of turning PET polyester and plastic bottles into a backpack is certainly not simple, but we will try to explain it as simply as possible. In short, the bottles are shredded into flakes and chips, then they are melted and reshaped into yarn. The yarn is then sewn into the EcoSmart bags. And that is how the sausage is made!

Small companies coming up in a competitive market cannot be expected to take environmental initiatives (except for the few who prop up with that sole goal) as recycling can be expensive and not necessarily cost-effective. But when established companies take that initiative and set an example, they set the standard for others who will inevitably follow them.

The efforts that Logitech and Targus have put into their environmentally conscious ventures is sure to trickledown into the tech sphere, prompting other companies to live up to the new standard. This way, everyone wins. 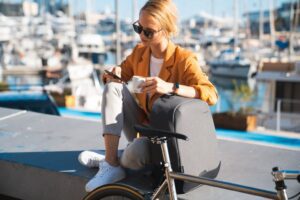 As the authorized distributor for Logitech and Targus products in the region, Newcom offers a wide range of the products offered by these environmentally conscious and eco-friendly brands, including those mentioned in this article.