Two 360-degree webcams that will change your video conferencing game

Webcams have become a ubiquitous feature of all modern laptops––but, when it comes to the quality of these webcams, the ubiquity isn’t as pronounced! In terms of webcam and microphone quality, laptops sometimes leave a lot to be desired. This lack of quality is especially true if your laptop isn’t the most premium, top-of-the-line model.

If you are unhappy with the video and microphone quality your laptop’s webcam offers or if you just have a desktop computer with no webcam at all, in this article, you will find two great webcams to improve the video and microphone quality of your next streaming session, online class or video conference: the JVCU100, j5Create HD USB webcam suited for individual use, and the JVCU360 All-Around Webcam, an HD webcam suitable for video conferencing as a group. 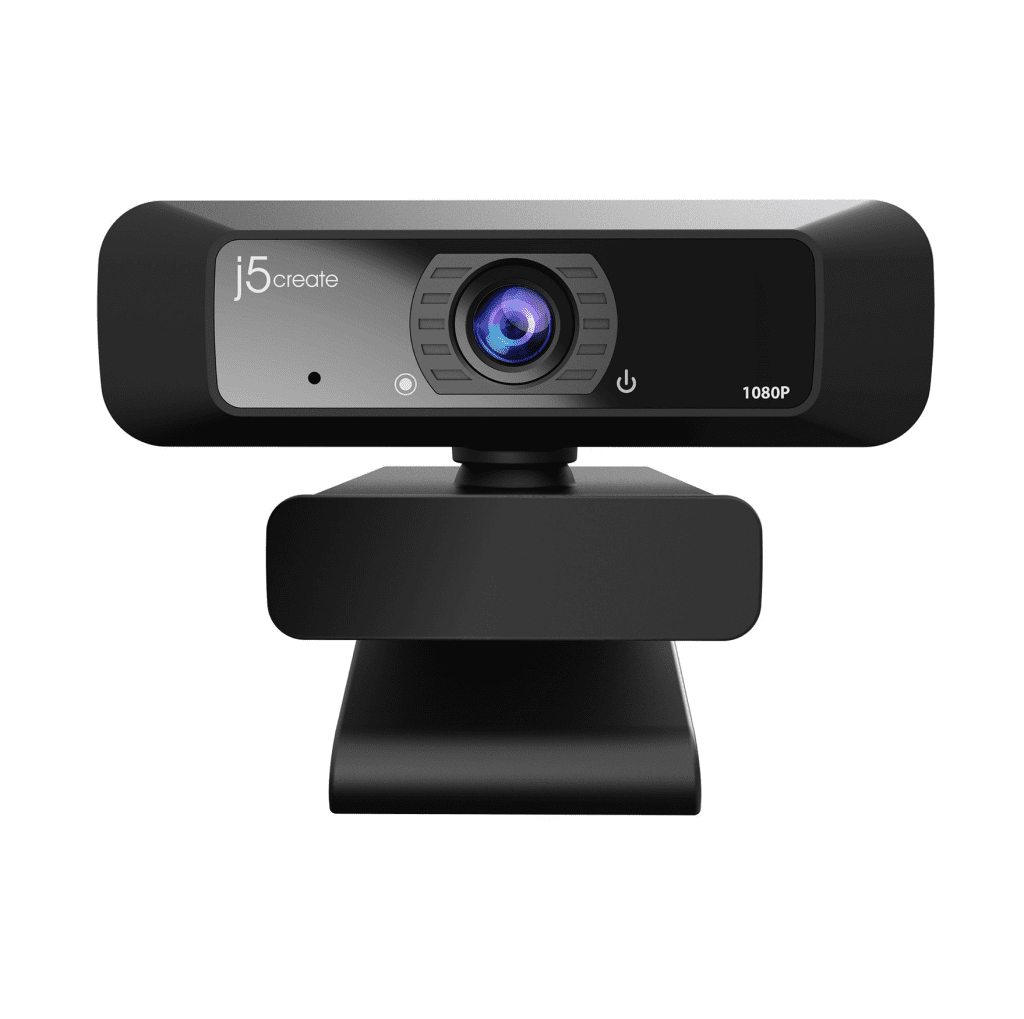 JVCU100: A step up that won’t break the bank

If your webcam usage mainly consists of conference calls on Skype or Microsoft Teams, your webcam needs won’t be too demanding. So, you don’t need to spend a lot on it because both the resolution and framerate of your video capturing device would be limited anyway. This j5Create webcam will step up the clarity of your image and microphone with its built-in high-fidelity microphone, compared to the image and microphone you get out of your laptop’s webcam and microphone. 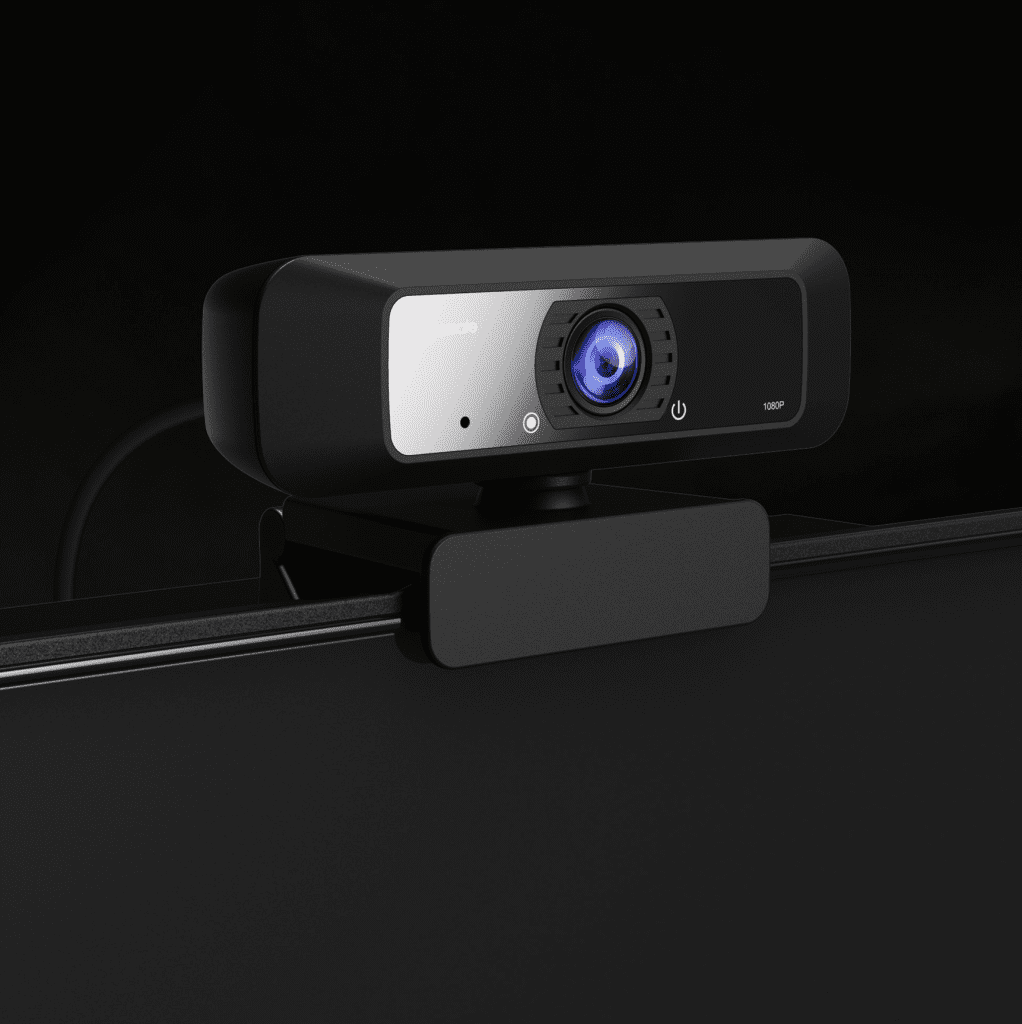 The step-up in video quality comes in the format of 1080p video capture with low-light enhancement given its f/2.4 aperture. The JVCU100 also features a wide 80-degree horizontal field of view that is wider than a lot of the other options, without too much distortion.

Due to this webcam’s ability to make a 360-degree turn, you will also get the added benefit of adjusting the angle of your webcam without having to move the laptop around. With this HD USB webcam, not only can you swivel it 360 degrees horizontally, but you can also mount the webcam on a tripod if you are looking for a different angle. It also helps the overall experience that the webcam’s chassis is very well-built. It has a sleek, modern look with a mostly matte exterior and a visor on the front. The webcam is plug-and-play to make it as simple and hassle-free to use as possible. There is also a tripod mount at the bottom of the webcam, so if you choose to go beyond using it for your calls, you have that choice.

Overall, the JVCU100 j5Create webcam is a great budget option for desktop users who need to add a webcam to their computers or people who own budget-friendly laptops that tend to have low-quality 720p webcams and a below–average microphone. 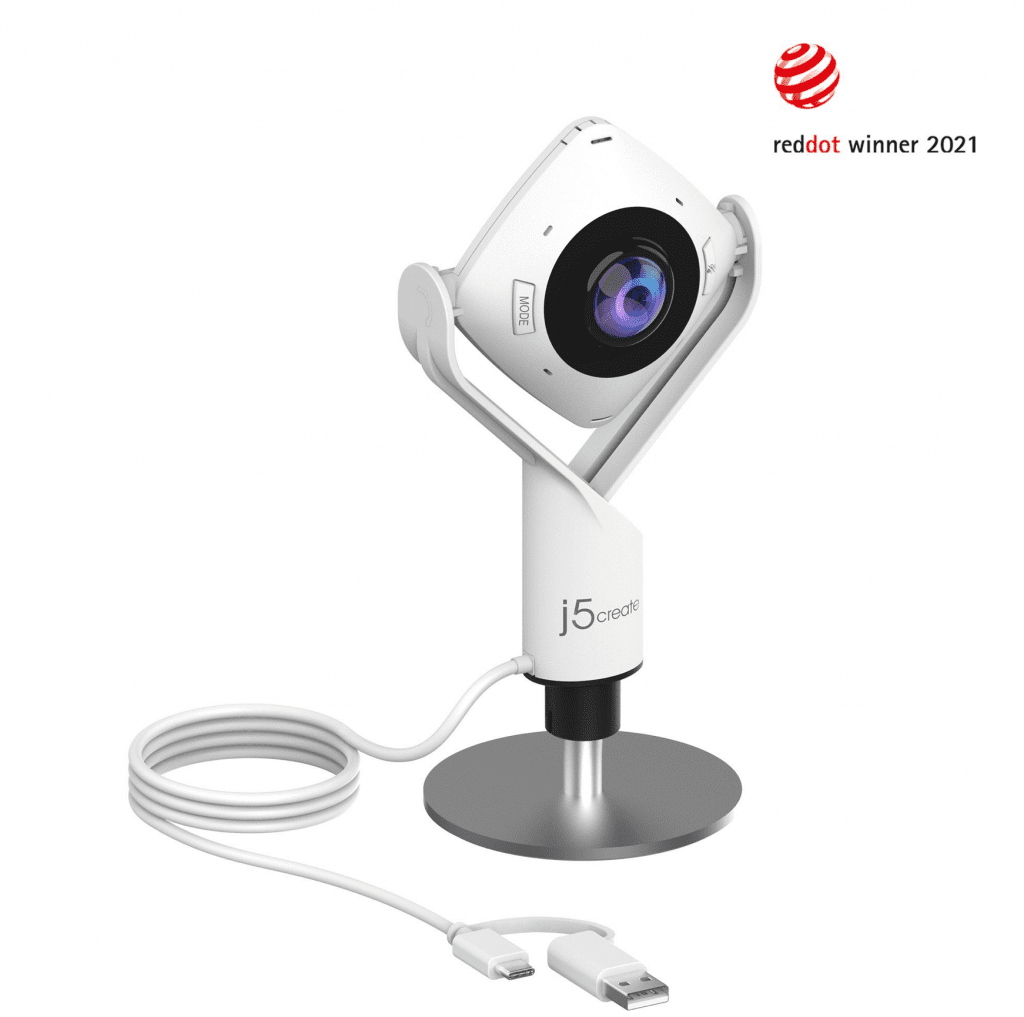 JVCU360 All-Around Webcam: The most exciting webcam you’ve ever seen!

The All-Around Webcam is an HD USB webcam with 360-rotation capabilities packed with features that make it a much more exciting option than a lot of its competitors. Most of them are concerned with its––you guessed it––360–degree horizontal field of view. It opens the door to a whole lot of crazy features. But before getting into those features, let’s talk about the design.

You get maximum flexibility with this HD video conferencing webcam because of its design. You can rotate the camera up and down, left, and right to infinite angles. There are also two buttons on either side of the lens:  a standard mute/unmute microphone button for the omnidirectional microphone and another that switches between the different picture modes, which we’ll get into a bit later. 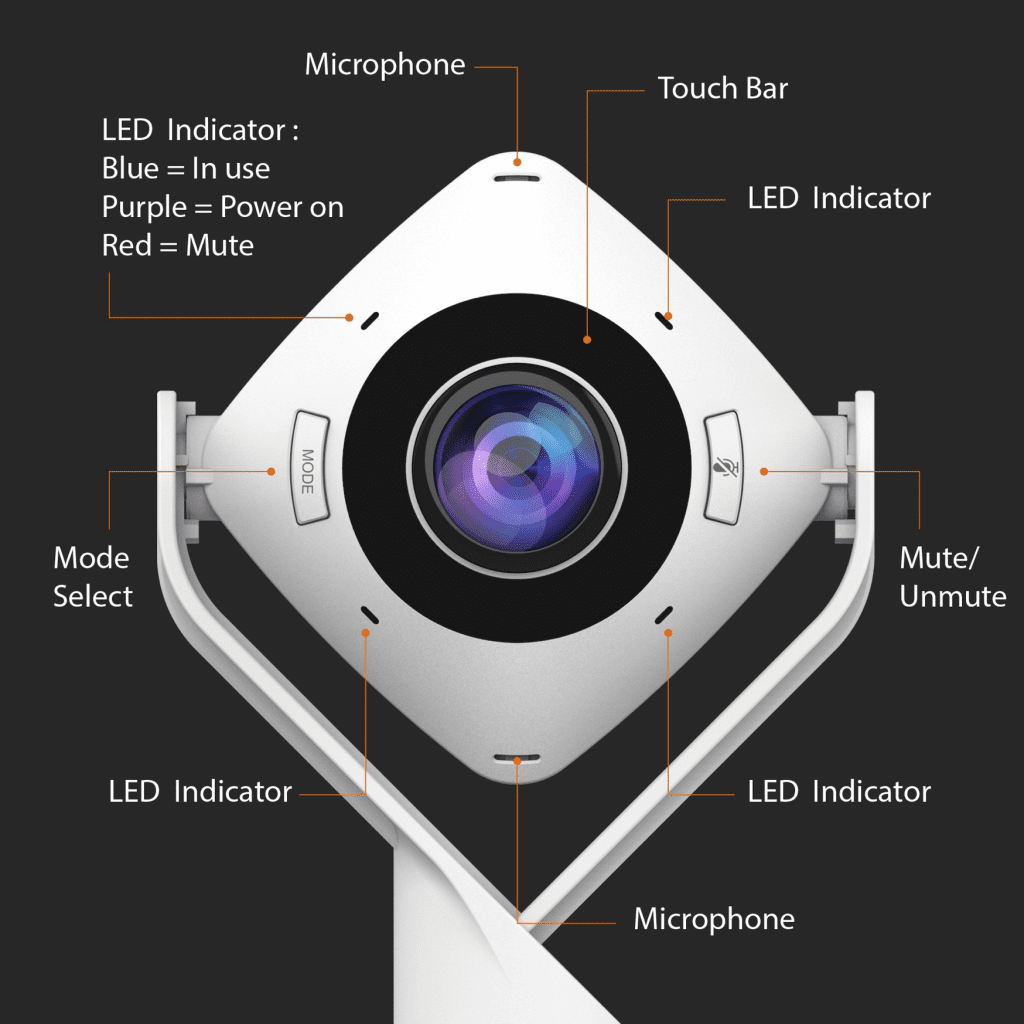 In terms of I/O (input/output) compatibility, there’s a USB–C plug at the end of the cable to connect to modern laptops. Thankfully, there’s also a USB–C to USB–A adapter attached right on the cable, so the webcam can connect to older laptops just as easily. Speaking of laptops, you can use this device with laptops that operate with iOS, Android, or Windows.

There are four light indicators around the lens to show when the device is being used and when it is muted. The camera unit is attached to a weighty metal base that can be unscrewed to attach to a tripod, opening even more options and crazy scenarios to use this camera in. 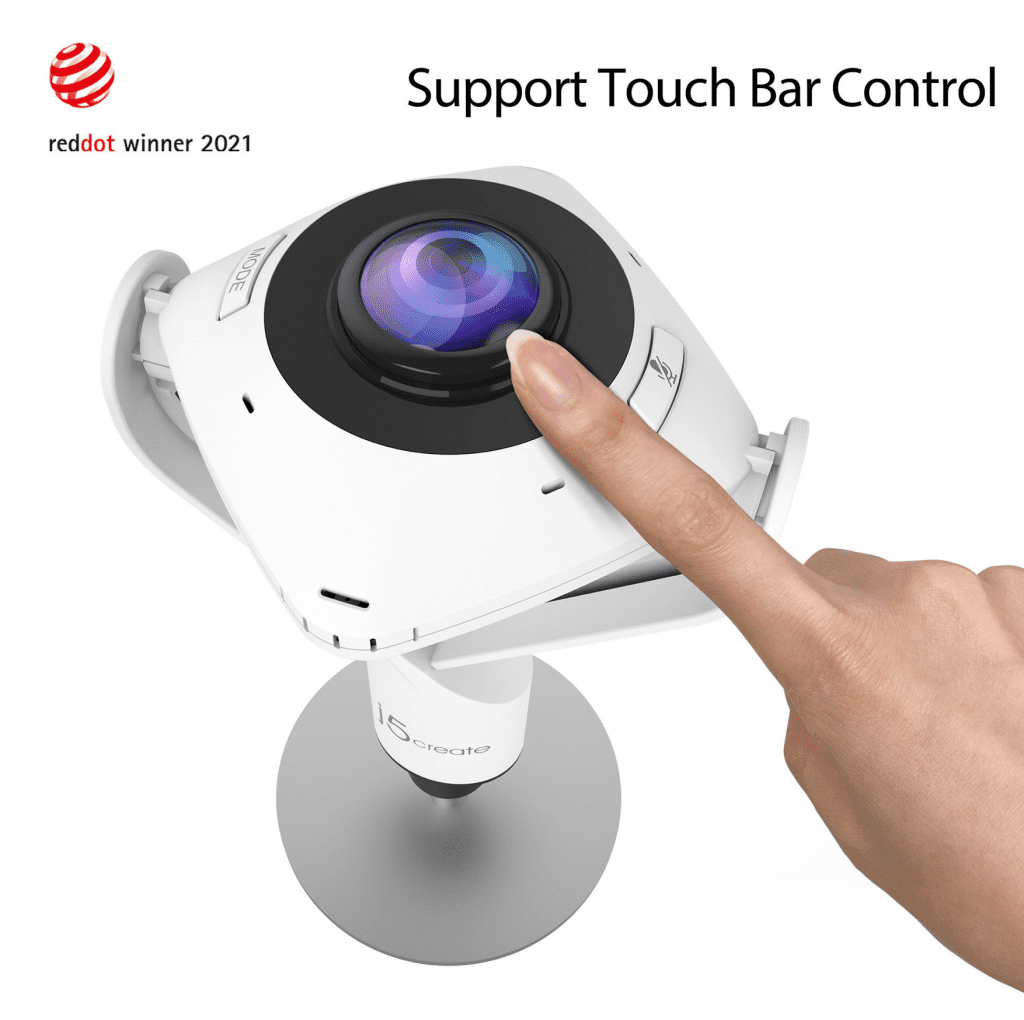 I say “camera” and not webcam because it’s almost unfair to limit this feature-packed 360-degree camera to just a webcam, which implies it’s only made for video conferences and such. The capabilities built into this camera are far more exciting than your average run-of-the-mill webcam.

So, enough beating around the bush! Let’s get into the different video modes that make this camera stand out from the crowd, starting with what the “Mode” button does on the left side of the lens. It toggles between 6 different modes that use the 360-degree lens in clever ways that you just won’t find in other webcams! 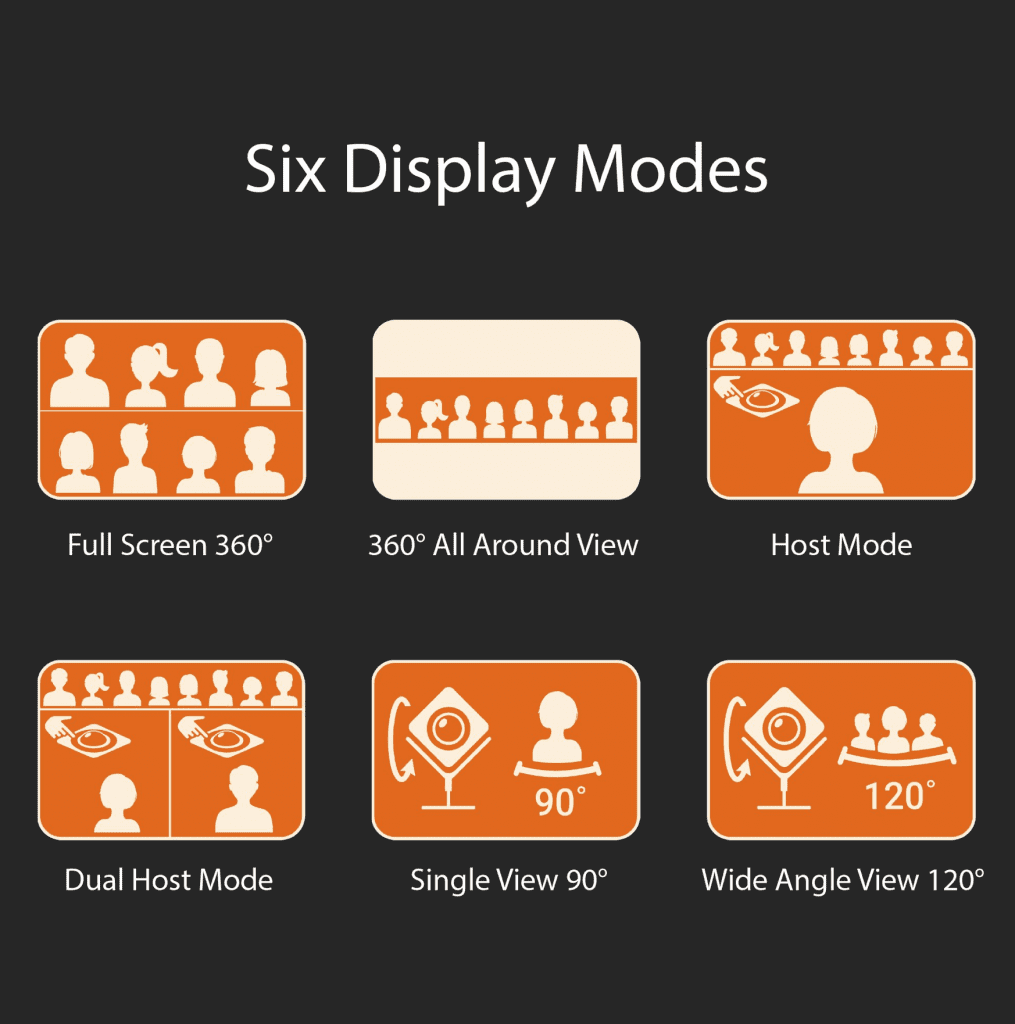 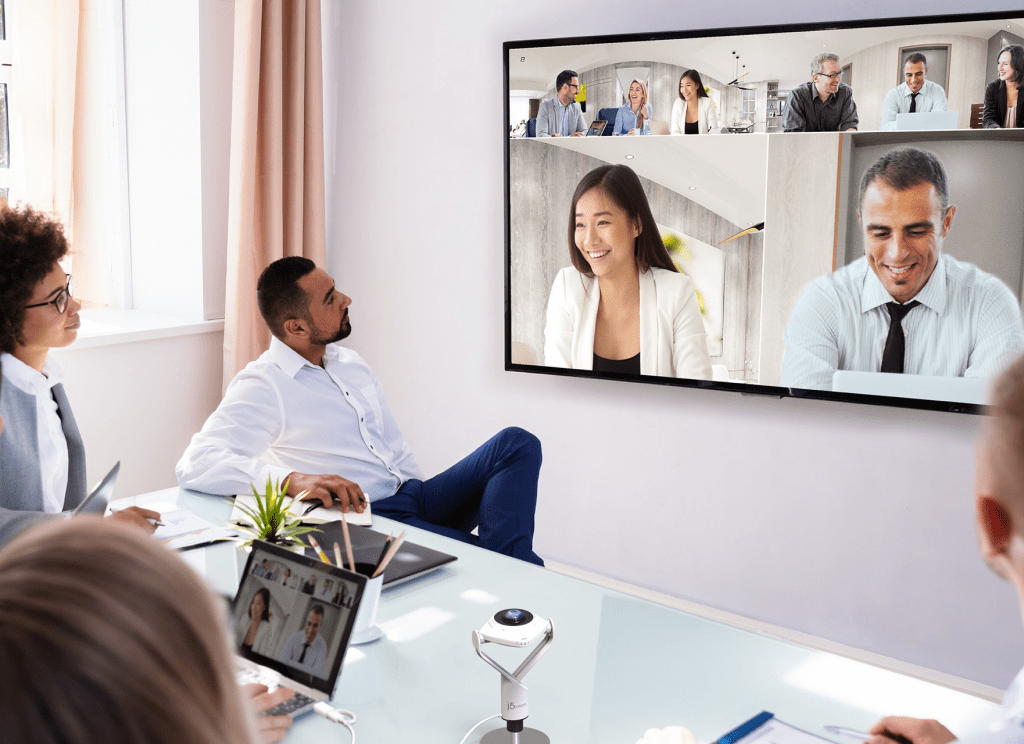 All these video features are complemented by the omnidirectional microphone that can pick up everybody’s voice up to a radius of 10 feet, making sure everyone is heard, except for distracting, faraway noises.

By purchasing the All-Around j5Create webcam, you get excellent build, picture, and audio quality, as well as flexibility and the other benefits that come with having a 360-degree camera.

If a normal webcam is all you are looking for, perhaps this isn’t the right choice for you, but if you think the freedom and options that a 360-degree camera offers is something that fits in your workflow, you would have to look very hard to find a more accessible and reasonably priced webcam (okay, at the end of the day it is still technically a webcam so…you win I guess!).

As with any purchase, the most important thing to keep in mind is needs analysis when it comes to choosing between these two products. If you feel like you won’t be needing or using any of the crazy, fun, and niche features in the All-Around Webcam, take another look at what you will be doing with your webcam.

If you think that you will only be using it for the occasional video chat and nothing more, the JVCU100 will be more than enough for your needs and comes with a more appropriate price tag to match.

As an IT distribution company that supplies j5Create’s products within the region, Newcom offers both webcams mentioned in this article. If you are looking for either of the options mentioned above or other types of webcams, please make sure to check out our products page for a few suggestions. For further information or in case of any inquiries, make sure to directly call us or reach out through our contact us page.