What is Logi Bolt? An introduction to Logitech’s revolutionary receiver

Logitech has once again come up with a category-defining product; this time in the form of a USB receiver that connects your mouse and keyboard to your computer. It takes the older Unifying receiver, which was already the only moniker that people knew about in the computer peripheral space, and made it better in key areas. The newer Logi Bolt USB receiver and Bolt-enabled devices are now more reliable and more secure, but just as convenient as the Unifying receiver. 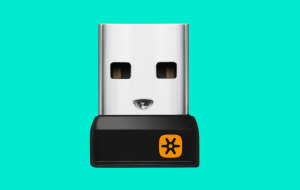 In recent years, many of Logitech’s products have been well-received and set industry standards, because of both their quality and performance. This has been no different for their USB receiver known as the Logitech Unifying receiver.

These are the clear advantages that Logitech has had over the competition since they introduced the Unifying receiver. Now, they are building up on edge they have had by putting more focus on security, which appeals especially to enterprises.

The current 2.4Ghz standard that is widely used in most if not all wireless computer peripherals, while secure enough for most scenarios, is not entirely secure. Even some of Logitech’s peripherals have been targeted by mousejacking attacks through methods of force pairing, keystroke injection, and fake mouse.

Does this mean that you need to go out and get any mouse or keyboard with a Logi Bolt moniker on it? No. These attacks rarely, if ever, target individual users. This is rather a threat for enterprises, especially those that operate in cyber-security, finance, or any other sensitive industry. It is for these enterprise users that peripherals that support the Logi Bolt USB receiver should immediately seem like attractive options. 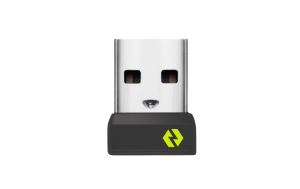 What is Logi Bolt?

Logitech Bolt is a USB receiver that uses Bluetooth Low Energy (LE) connection to establish the link between the peripheral and the host device. Bluetooth is generally a safer option than wireless receivers, and this is why Logitech went with Bluetooth. It’s a simple enough concept, but so far, Logitech is the only brand to have improved upon the now ancient wireless technology. Of course, it might take some getting used to, especially for owners of Logitech’s older devices that used the Logitech Unifying receiver, which will not work with the Logitech Bolt devices.

Logi Bolt-enabled devices meet a security standard known as U.S. Federal Information Processing Standards or FIPS, which further cements the security of the connection. The standard essentially means that the Logitech Bolt device and the Logitech bolt receiver
are only able to communicate with each other and are impenetrable from outsider attacks. This is an added layer of security that encrypts communication between the peripherals and the devices they are connected to, and even alerts users when the peripheral is paired with an unknown device. With the Logi Bolt USB receiver, IT managers still can exercise centralized oversight on Bolt-enabled devices. 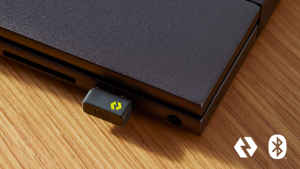 On top of the added security, with the Logitech bolt receiver, you can enjoy the same benefits that Logitech Unifying receivers offer. Logi Bolt supports connection with up to six peripherals, leaving you only with a single occupied USB port at a time when mainstream laptops are being released with only two. Logi Bolt is compatible with all major Operating Systems, including Windows, macOS, Linux, and Chrome OS. If you don’t want to use the Logi Bolt USB receiver and just use Bluetooth on the device alone, you can also add iPadOS and Android into the mix.

Now that the advantages of the new Logitech bolt receiver have become clear, let’s look at a few options that are Logi Bolt certified and that you might want to look at if you are in the market for a wireless mouse or keyboard. 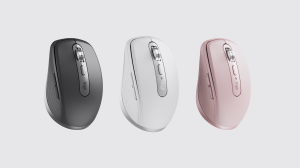 This award-winning Logitech Bolt device, which is the compact brother of the class-defining MX Master 3, retains almost everything that made the current king of the mouse world in a more compact and portable form factor. It features the same premium build quality that we have come to expect from Logitech’s Master series. It offers innovative scroll functionality that smartly adjusts itself to be as pixel-perfect accurate or as quick as you want and has a couple of extra customizable buttons on the side.

But the Logitech Options+ software is what ties all of the features together and makes them ten times better. Options+ offers you ultimate control over what each button does depend on which window or software is active. The two side buttons can act as tab right and tab left when you’re using Chrome, and turn into undo and redo when you’re using Photoshop. Options+ is truly amazing in terms of the features and the level of customizability it provides the users.

MX Anywhere 3 can connect to up to three devices, and now that it supports the Logi Bolt USB receiver, the mouse offers a new level of flexibility and security to professional users and business owners, who can rest assured that their employees can enjoy the benefits of having a best-in-class wireless mouse without the slightest potential of being subject to malicious mousejacking attempts. 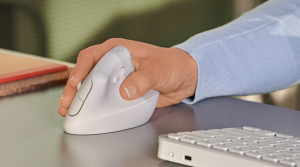 It is all about comfort with this mouse. The Bluetooth Logitech Lift underwent scientific experiments to be able to provide the most ergonomic fit possible. It aims to tackle bad wrist posture. If you have developed Carpal Tunnel Syndrome, are having wrist pains after a period of using your computer, or simply want more comfort using a mouse, Lift is the right mouse for you.

The Lift offers more than just comfort though. It is a full-featured mouse that has all the offerings that we have come to expect from a mouse with Logi branding. It has a smart scroll-wheel that allows for precision scrolling, as well as super-fast scrolling, depending on how your finger commands it. The scroll wheel, in combination with either of the two side buttons, can also scroll horizontally. The two side buttons offer even more functionality on their own (when programmed through the Options+ software).

The Lift, being a modern Logitech mouse, comes with full integration with Logitech Options+ software; the ultimate customization tool for all things Logitech (except their gaming products!). It gives you the option to customize the side buttons in each software and download app profiles to give the mouse buttons different functionality in each application.

The Logitech Lift for Business, which comes with the Logitech bolt receiver, not only puts your wrist at ease but also your mind from the ever so slight potential of a hacker with malicious intent snooping on your mouse clicks over the air. 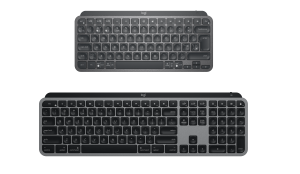 The MX Keys and MX Keys Mini are currently the best all-rounder keyboard offerings by Logitech that get the fundamentals right. You would be hard-pressed to find anything to complain about when it comes to the MX Keys lineup. They are low-profile, silent wireless keyboards with scissor switches and multiple instant connectivity options with smart backlighting that is built to last. The silent nature of the keys can be considered a huge plus for shared work environments. The typing experience is also helped by the recessed keys that ever so slightly reduce the number of typos.

The only difference between the MX Keys and the MX Keys mini is that the latter has dropped the Numpad in favor of a more space-saving form factor. The mini could be especially useful for companies with less space since it will help free up desk space for employees with small desks. The secure connection with the Logi Bolt USB receiver also ensures that the connection between a device and the keyboard is as secure as it is reliable.

The benefits that Logi Bolt brings compared to the older Unifying receiver were outlined in this article. Put simply, it brings the same versatility of the Unifying receiver, the same peace of mind om case of losing the receiver, but with more reliability and much-improved security. The military-grade encryption of the communication between the host device and the peripheral as well as the more reliable, less prone to signal interference nature of Bluetooth LE puts the Logitech bolt receiver heads and shoulders above any other standard currently on the market. 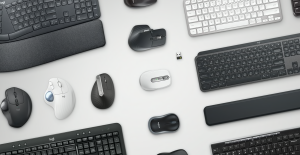 As an official Logitech distributor within the Middle East and North African region, Newcom offers a wide range of Logitech peripherals, including various Logitech Bolt devices such as the ones mentioned in this article.